From The Vault - Fallout Wiki
(Redirected from .357 magnum revolver)
Jump to: navigation, search

The .357 Magnum revolver is a weapon in Fallout: New Vegas.

One of the most recognizable creations of the American firearm industry, the .357 Magnum revolver dates back to the 19th century, when the United States military was looking for a new service revolver. The success of the design left to its widespread adoption by public and private buyers, eventually becoming a symbol of American conquest of the so-called Wild West. The rugged design that has stood the test of time against contemporary pistols has made it a popular choice in some corners of the wasteland.[1] Functionally, the single-action revolver is exactly what it says on the tin, a single-action, fixed-cylinder revolver. It's highly reliable and fires a powerful round, though its antiquated design requires it to be loaded one bullet at a time, through a loading gate located next to the cylinder. An all around great weapon for beginners, but it's quickly replaced by better pistols. The revolver comes in stainless steel or blued nickel finish with either a bone or cherry wood grip and can even be modified by the user for a custom fit.

From a design perspective, the revolver is essentially a refined version of earlier percussion and cartridge revolvers. The centrally mounted cylinder carries six rounds, fired down a lengthy barrel. Elevated high above the grip, the positioning reduces recoil and improves aiming ability. The one peculiarity of the design is that there is no real safety beyond a safety notch that could be easily damaged and disabled by a sharp blow, causing the weapon to discharge. Pre-War users would usually leave one chamber unloaded for this purpose. Post-War, that round means the difference between life and death.[2]

The Single Action was available in multiple calibers, including .357 and .44 Magnum.[3] 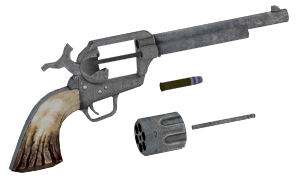 The .357 Magnum revolver is a single action, fixed-cylinder revolver. It's highly reliable and fires a powerful round, though its antiquated designs requires it to be loaded one bullet at a time, through a loading gate located next to the cylinder. However, this also allows the weapon to be fired quickly under duress, as opposed to more modern designs, which require the entire cylinder to be emptied before reloading.

Weapons found in the Mojave are somewhat worn, medium-gray. While the action and barrel are constructed of steel or iron, the grip appears to be carved from an antler. Some two hundred years ago this was likely a fine, highly performing weapon, but years of elemental and human abuse have eroded the pistol, leaving it a weathered, though still serviceable revolver.

The iron sights are set low, making it hard to use the weapon at ranges other than close quarters combat. However, the weapon has incredible reliability, cannot jam, and is an improved holdout weapon (can be taken into weapon-free locations with a Sneak of 50 or more). The abundance of .357 Magnum rounds is also an asset.