The 10mm submachine gun (SMG) is a weapon in Fallout: New Vegas

The following section is transcluded from Submachine gun. To modify, please edit the source page.

Commonly considered to be one of the finest weapons in the world, the Heckler & Koch MP9 submachine gun fires the powerful 10mm ammunition. Although the single shot is comparable to the Colt 6520 or the N99 pistol, the MP9 truly shines in burst and fully automatic modes. Coupled with the compact design, sturdiness, and light weight, it becomes a powerful asset in the hands of anyone in the wasteland. Although, the high fire rate means the urge to spray-and-pray must be controlled, unless the operator wants to run out of ammunition. Thankfully, the ease of handling makes this easier than it seems.[1] An unique feature of the weapon is its two selectors: one for switching between safety, single shot mode, and automatic mode, and another for specifying the size of the burst, up to fully automatic fire.[2][3] 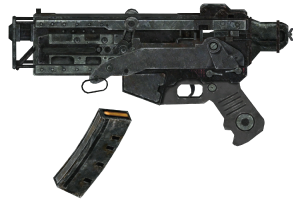 A powerful one handed automatic weapon, the MP9 boasts excellent damage per second against unarmored or lightly armored targets. However, as damage is calculated per bullet, it will offer sub-par performance against targets with a higher damage threshold. Additionally, the high weapon spread means that the player will have to fight on close ranges for all of the rounds to hit their intended target.

Its key flaw is its ammunition consumption: With a cyclic rate of over 600 RPM, it can go through a full 10mm magazine in under 3.5 seconds. It can fire a total of 2495 standard rounds, about 83 magazines, before breaking.

However, it will not slow the player down, as it is a one-handed weapon.