The SIG-Sauer 12.7mm pistol is a weapon in Fallout: New Vegas.

A large framed semi-automatic pistol, the SIG-Sauer 14mm handgun is unique in more than just looks. Unlike the tilting barrel system used by the vast majority of pistols, it relies on a fixed barrel without a slide. A weight underneath the front of the barrel absorbs the recoil, actuating a bolt which extends backwards above the shooter's hand, before being forced back by a recoil spring, feeding another round into the chamber.[1] The 14mm pistol was imported to the U.S. from Europe in limited quantitites,[2][3] making them a rare, but powerful weapon. As the availability of 14mm Euro ammunition decreased, existing and new units were converted to fire 12.7mm ammunition.[4]

The 12.7mm pistol is the same as the standard 14mm pistol, except rechambered to accept 12.7mm ammunition. The decrease in caliber also allows the magazine to hold one more round, for a total of seven.[5][6] 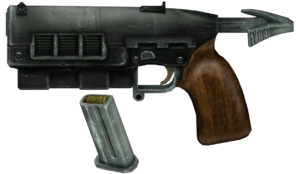 A Tier 4 pistol with extreme firepower, the 12.7mm pistol is the deadliest sidearm available in the game, with the best base damage in Fallout: New Vegas. With Honest Hearts, it takes second place, right after A Light Shining in Darkness.

To balance its firepower, it requires Guns 75 and Strength 7 in order to properly operate. Furthermore, it has poor weapon spread: The highest of all pistols in the game.