From The Vault - Fallout Wiki
(Redirected from ARCHIMEDES II)
Jump to: navigation, search 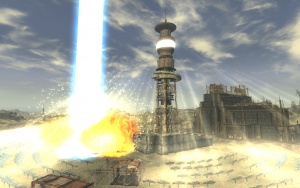 We lost most of the chapter defending glorified artillery.

Archimedes II is an energy-based artillery satellite built by Poseidon Energy at Helios One in Nevada.

Poseidon Energy was likely to have had behind-closed-doors relations with the United States military (parts that would become the Enclave) and was commissioned to develop a new and devastating weapon.[1][2] Unlike its predecessor, Archimedes I, which was a defense system specifically for Helios One, Archimedes II could be utilized offsite, within a limited radius from the Helios One collection arrays.[3]

While Father Elijah was still an Elder of the Brotherhood of Steel, the Brotherhood found Helios One in Nevada.[4] It was not long before they discovered the secrets within the facility, namely Archimedes II. The pre-War technology the Brotherhood sought to preserve and keep out of the hands of wastelanders was often weapons-based, so it was only a matter of time before another party came to investigate their motives with something as seemingly safe as a solar power plant.[5]

The New California Republic set up their headquarters in the Mojave at Camp McCarran in 2275 and took Hoover Dam, but because of their past relations with the Brotherhood, they also came investigating Helios One. In 2276, the NCR was able to lay siege to Helios in Operation Sunburst and gain control of the facility, kicking the Brotherhood out and knowledge of Archimedes II with it. So far, the NCR has not been able to unlock the secret of Helios as the Brotherhood had, thanks to a Follower of the Apocalypse, Ignacio Rivas, who has kept them in dark for fear that such a devastating weapon could end up in the wrong hands. As he phrases it, "Some things are best left buried with the old world."[6] Luckily for him, and perhaps the rest of the wasteland, the NCR has bigger problems beyond being kept in the dark by Rivas; they hired an incompetent conman, Fantastic, to get the power plant up to code[7] and the security system within Helios is currently too dangerous to send soldiers inside, but it's only a matter of time before the NCR (or Caesar's Legion) reaches the Archimedes mainframe.[8][9]

Before Archimedes II can be utilized, it must be activated by choosing to divert the power of Helios One to it at the end of the That Lucky Old Sun quest. Additionally, 24 hours are required to charge the solar arrays to full power. With that, the orbital laser is triggered by allowing two lasers to converge on a target; one is marked by Euclid's C-Finder and another by the beacon located at Helios One. By triangulating the distance from the satellite to Helios One and the distance from Helios One to Euclid's C-Finder, the satellite can precisely mark the point on Earth is must fire upon. Upon the target site, three laser beams to converge on the target, followed by a large blue laser beam from the sky which causes massive damage.