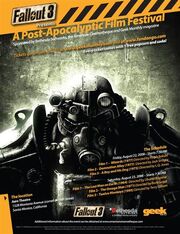 Bethesda Softworks, the developer and publisher of Fallout 3, The American Cinematheque, and Geek Monthly Sponsored A Post-Apocalyptic Film Festival Presented by Fallout 3. It was announced on July 11, 2008 and took place at the Aero Theatre in Santa Monica, California on August 22 and 23, 2008.