Among the Stars is a main quest and achievement/trophy in the Fallout 3 add-on Mothership Zeta.

The objective of the first stage of this quest is to destroy the three generators on the ship. They are in the hangar, cryo lab/storage, and robot assembly. You have the option of bringing along with you one of the three abductees who were thawed out. Note that the samurai's sword disappears once you've destroyed all three generators, so if you want to collect it you should visit the maintenance level sometime during this quest.

Elliot Tercorien will assist in the cryo Lab area if asked (and the player has no other current followers).

Upon entering the labs, hostile aliens will attack from the right. On the left there will be a room that is accessible by passing over the glass floor. On the wall next to the door is a switch which will unlock the room below. The unlocked room contains alien and wasteland items.

Proceed back upstairs and turn to the right. Face north and proceed through the open door. There will be aliens and drones in the room the player will enter. The drones' sensors can be realigned (if the player has the drone control device) to target creatures that are hostile to the PC.

On both sides of the room there are switches. One activates the log and another thaws a ghoul and a raider. Upon leaving that room there is a similar room with the same cryo-storage pods. Activating them will release another ghoul and raider.

Upon passing through that room, the player will come across an examination room. Activating the switch will seal the doors and freeze everything inside, including the aliens that are conducting experiments.

The next room contains two pods which contain soldiers, Private Beckett and Sergeant Daniels. Elliot Tercorien will attempt to revive them. If they are revived before he has checked on their status, they will both be instantly hostile and fight each other to the death before then attacking the Lone Wanderer. If however, Elliot successfully completes his research, then they will join the fight to escape for a brief time before dying. Continually engaging Elliot Tercorien in dialogue will trigger advancement of the research (leaving him alone will not). After each dismissal, he will announce the next stage in his progress towards safely reviving Private Beckett and Sergeant Daniels, finally telling the player when it is safe to trigger the release switch.

After either reviving or killing the soldiers, the player will enter the main cryo-storage bay. There are several aliens on both sides of the bay. Throughout the storage bay there are numerous switches which, when activated, will thaw its associated contents. Usually ghouls and raiders. On the lower level, there are super mutants that when thawed will attack the aliens which will solve most of that problem. If Broken Steel is installed already, these may be super mutant overlords, which are moderately hard to kill and may cause some problems for lower level players.

After all the enemies are destroyed, face north and head down the corridor. This is on the second level. If you go downstairs, you are proceeding in the wrong direction. At the end of the corridor will be the generator. Destroy the generator. You may find that it is impossible to exit the way you entered and it is easier to go right out of the generator room and then use the teleporter to go back to the beginning of the cryo lab.

Paulson will assist in the hangar area, if asked in the engineering core. However, he might not survive and his corpse might disappear in the battle, making it impossible to loot Paulson's revolver.

Walk all the way through corridors and up the stairs until you see the two drones. Go left and follow the wall around and there is another blocked door. Pushing the switch to open it sets off an alarm. At this point, a seemingly endless stream of aliens and drones will come from the two doors that are now unblocked on the lower level. Activating the pylon controls will knock over and damage nearby hostiles. More than likely, some will get through anyway and attack you in that control room, so be prepared to fight conventionally as well. When you have finished tearing through the alien horde, the door to the generator will become unblocked.

Conveniently, there are two healing archways forming a path between the generator room door and the balcony overlooking the hangar. Also of note: by the end of the battle, a hatch raises into place below the levitating alien craft (the recon craft Theta), completing the floor beneath. Also, be sure check the rooms the aliens were streaming out of now that they are open. There are at least two supply containers in addition to other alien loot.

Now go back up to the balcony to the door where you set the alarm off. Walk in the door that is now open and directly in front of you is a blue switch. Press it and the generator and three coolants elevate. Like earlier in the add-on, activating all of the coolants will cause the generator to explode. Exit the way you entered.

Somah will assist in the robot assembly area, if asked in the engineering core.

If you brought Somah, after speaking she'll fix and use a teleporter ahead and to the left of the entrance while an alien worker almost crosses her path coming up the stairs. After Somah teleports across the way, head downstairs and to the right. Straight ahead is a corner shelf in an area abundant with alien epoxy. On one of those shelves and on the floor you'll find three units of alien power cells (2x50, 1x12). Back down the main hall, there's a healing archway to the right.

Follow the stream of partly assembled robots down to the end of the room. You will confronted by several guardian drones armed with drone cannons. Regular drones will attack as well.

At the very end of the room, you should see all the robots going into a machine that's on the wall, and on the side of this machine is a blue robot symbol. There you can override the machine, causing it to explode and knock you over. Now there is a hole in the side of it which you can walk through into the next room.

In this next room, approximately 3 guardian drones, 5 support drones and a minimum of two aliens will attack the PC. One of the aliens has the useful drone control device. Upstairs you'll find alien epoxy and alien biogel. A healing archway will be under the second level. From there you proceed forward, down the stairs and on to the generator. For a quick exit after destroying the generator, follow the two hallways directly behind you to reach a teleportation pad that will send you to one of the inactive pads you saw when you first entered the robot assembly area.

Once all three generators have been destroyed, the decompression chamber becomes available. If you wish to complete the Alien Archivist achievement, now is the time to be sure that all the Alien captive recorded logs thus far have been collected (those from the holding cells, engineering core, cryo lab, cryo storage, waste disposal, and research lab (you should have a total of 19)), as most of these areas will be closed off and can not be re-entered once the spacewalk has been started. Also, if you want to get the MPLX Novasurge or other loot available in rooms off of the Engineering Core, now is your last chance.

Enter the chamber and put on the spacesuit looted from Colonel Hartigan. Then press the room's single control switch, which decompresses the airlock. Make your way through several doors to a new area, the space walk. Along the way you'll find several dead (apparently decompressed) aliens and an optional side room with a few containers.

While in space, you'll find that you cannot access your Pip-Boy, draw a weapon, change apparel, or rest. You will detect two alien enemies in the glass corridor below but you cannot harm them (and vice-versa).

During your space walk, you need to locate three exposed panels to activate the large teleporter in the middle. The first is just to the right of where you come out of the airlock. The second is all the way across the ship, almost opposite the first. The third is very close to the central teleporter itself.

Once all three panels are activated, step into the now-active transporter to end this quest and begin This Galaxy Ain't Big Enough...

Note that you cannot remove your spacesuit until you re-compress the atmosphere in the next chamber. 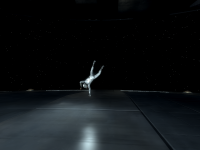 Example of death in floating off into space