Have you seen what one of those anti-materiel rifles can do to a deathclaw?

Utilizing an ergonomic, metallic skeleton design with a free floating barrel, the .50 anti-materiel rifle is a bolt-action, high caliber precision weapon intended for use against materiel and hard targets. The rifle includes a deeply fluted barrel to disperse heat and reduce weight, while its large muzzle brake reduces recoil to manageable levels. Unlike most rifles, the AMR was designed from the ground up to be used at long and extreme ranges: It lacks any kind of sights, featuring instead a mounting rail for high powered scopes and a forward bipod mount.[2] 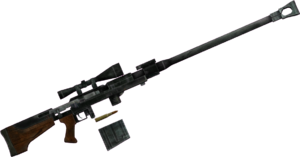 The rifle in all of its glory.

This high end weapon is intended for use at long range distances, due to its weight, size, and recoil. It offers a very high damage rating, among the highest in the game, and excellent accuracy. Coupled with its 3.13x scope, it's among the best long range weapons available to a marksman. When loaded with match-grade rounds, it offers the highest long range accuracy in the game, up to 95% in V.A.T.S. at extreme ranges.

Of course, as a dedicated heavy sniper rifle, it has a number of drawbacks. It has a low fire rate and has to be manually rechambered after each shot, it and its ammo weigh a lot (the weapon alone weighs 20 pounds, with a loaded 8 round magazine an additional 2), and the sheer power of the round puts a lot of stress on the weapon, necessitating frequent repairs. A fully repaired rifle can fire 471 rounds before breaking, which translates to a loss of 0.2% durability per shot, or 17/18 caps in terms of repair.

Interestingly, when the AMR is fired from the hip, the recoil will push the operator back. Whenever the weapon is shouldered, the recoil is distributed properly.