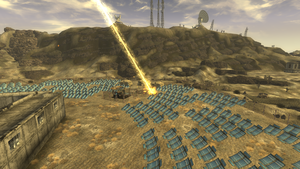 Archimedes I in action

Archimedes I is a land-based directed energy weapon created by Poseidon Energy at Helios One, appearing in Fallout: New Vegas. It is the predecessor of the space-based Archimedes II.

Established before the Great War as a next generation solar power plant, hailed as the Dawn of a Golden Age, Helios One was more than just a renewable source of energy. It doubled as a research and development facility for the U.S. Army's top secret energy weapons: Archimedes I and Archimedes II. The military side of affairs was handled by Brigadier General Scott Lowe, who oversaw the testing of the weapon on site.[1]

Tests of the weapons conducted on February 16, 2077, were less than pleasing: While both weapons proved functional and successful, several minor systems were overloaded despite all precautions taken, and the entire plant shut down for two and a half minutes. Nearby facilities also experienced system-frying power fluctuations at the time of the test, notably the Black Mountain communications array and the military bunkers at Hidden Valley. The team decided to focus on minimizing collateral damage and reducing downtime under the oversight of Brigadier General Scott Lowe, but further development was precluded by the Great War.[2][3]

When the Mojave Chapter of the Brotherhood of Steel occupied Helios One, Elder Elijah attempted to reactivate Archimedes I and use it to defend the facility from the NCR forces during Operation Sunburst. However, he was unsuccessful, only getting as far as reactivating the security systems to prevent the Republic from continuing his work before disappearing entirely.[4]

Archimedes I was a proof of concept for Poseidon Energy's new energy weapon design. The most revolutionary element of its design was the method of power transfer: Using microwave radiation to transfer energy from the solar plant to a remote receiver and converting it back into a usable form.[5] The weapon was designed to act as a Plant Defense System and integrated into the solar collection tower, together with autonomous targeting routines that would acquire any hostile targets without the need for a human operator.

The player can activate the Archimedes Plant Defense System from Helios One's observation deck at any time upon accessing the solar collection tower. The test fire will wipe out NCR forces outside, resulting in a severe reputation drop with the Republic (though no karma loss). If Arcade Gannon is present, he will immediately leave the player's party and attack, in a desperate attempt to deactivate the system. If the system is activated during That Lucky Old Sun, the Legion will subsequently occupy the plant.

Note that sending power across the Mojave Wasteland at emergency power levels will disable the Plant Defense System.