The Auto grenade launcher is a weapon in Fallout 76.

The automatic grenade launcher, sometimes referred to as a grenade machinegun, is a belt-fed, blowback-operated, air-cooled automatic weapon designed to lay down a heavy volume of explosive ordnance and support infantry and vehicle operations. Designed for use as a crew-served weapon, the automatic grenade launcher was intended for use against a variety of targets ranging from infantry and light vehicles to fortifications and other materiel. The sheer weight of the weapon and bulk of the ammunition limited its versatility, until the advent of power armor. Since then, many units were converted for use on foot, rather than from a tripod.[1]

U.S. automatic grenade launchers were manufactured in two major variants, accepting 25mm and 40mm grenades, together with a variety of additional equipment, such as an electronic fire control system (though most of these systems have failed in the decades after the war, becoming little more than dead weight).[2] 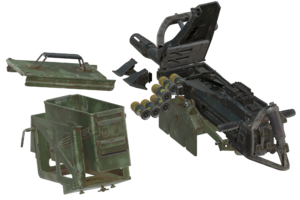 The automatic grenade launcher is exactly what it says on the tin. Delivering a high volume of explosive ordnance at range, it's difficult to ignore, especially when taking into account the damage bonus from the right perk cards (it does not benefit from Heavy Gunner).