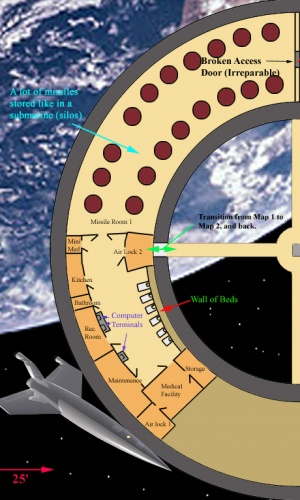 Exiting from Hermes XIII, this is the PC's first stop. It is a very sterile looking room with an access panel next to the closed door leading into the station itself. No special access codes are needed to open the door, but the player will have to stand in the airlock for at least five seconds so the decontamination spray can hose the PC down. Once that happens, the player may simply click on the access panel and the door will open.

The Medical Facility is at least twice as large as Airlock-1. It has six beds with three lined up against the south wall and three against the north wall. Smack dab in the center of the room is an Auto-Doc which the player may use at any time. There are also cabinets and shelves along the east and west walls, each holding various med-kits and drugs. If it's in the game, the player may concoct self-enhancing drugs and such in the lab that is placed next to the Auto-Doc. It's not an overly elaborate lab, but it is sufficient to make drugs and med-kits. It is basically one large table with beakers, tubes, and bottles lying about.

Exiting through the north door from the Medical Facility will place the PC in the Central Hall of the Living Quarters. Here the player will find several, recently used, fold-out beds attached to the east wall and three computer terminals attached to the west wall. Two of the three computer monitors are non-operational, but the lone operational central computer will display a countdown. At the top of every minute an audible computer voice will give a countdown status - for example, "T minus 120 minutes and counting to missile launch." This audible warning will continue until T minus 60 seconds, in which case the audio will countdown the seconds to launch.

The Maintenance Room is a bastion of hi-tech mechanic's delight. There are a couple of mechanic's labs the PC can tool around with, as well as materials to upgrade equipment – time permitting, of course; those missiles will fly soon, you know.

Also in this room are four docking stations for brain-bots. Three of the four are empty, but one has a brain-bot that looks like it has been recently deactivated. The PC can do some investigation on the brain-bot, as well as on the maintenance computer, and discover that the little bot has indeed been recently deactivated. A quick notes entry on the computer states that the brain-bot exhibited unusual actions, and even emotions, such as loneliness, anxiety towards Dr. Presper and his cronies' arrival, and even an attempt to halt Dr. Presper's plan to nuke the Earth's surface. The PC may opt to reactivate the brain-bot and try to reason with it (it will not take a dedicated Science Boy to reactivate the brain-bot). The brain-bot will first identify itself as S.O.R.-1000 Alpha, and then go into a tirade about how he must stop Presper from destroying the populated areas. The PC may discover through conversing that the brain-bot became "self-aware" about eighty years ago when a minor electrical surge opened up some new neural pathways. Alpha, as he likes to be called, then began a crusade to learn all he could about what happened to the Earth, why B.O.M.B.-001 was built, and study the bourgeoning societies that popped up here and there on the scorched Earth. To make a long story short, Alpha can become a CNPC and help the PC thwart Presper's plans to "cleanse" the Earth. Yes, he is a late level CNPC, but he can be very helpful, especially to a PC who is not Science focused. Plus, Alpha has dual laser guns, baby! Lastly, since Alpha is so late level, he does not count against the PC's companion limit – Alpha's a freebie.

Another fun thing the Mechanic Boy can do in the Maintenance Room is assemble a freeze gun. A bit of investigating in this room will turn up a schematic on a prototype freeze gun which the PC can use to assemble the gun. However, not all the parts for the gun are available in the Maintenance Room, so the PC will need to find viable substitutes for the components. Needed components are; freezer coils (kitchen); water and containers (bathroom); crushed crystal (TV in rec. room); power source (S.O.R.-1000 Beta of Delta). The remainder parts are in the Maintenance room. Once assembled, the gun works great against any armor since if super-freezes joints and moving parts, so the gun is effective against robots as well as the NCR guys. The gun will not necessarily kill a foe, but it will render it immobile, giving the player uncontested turns against the crippled enemy.

The Rec. Room holds a ping-pong table, two computers used for gaming and information, a dining table for four, and a large projection TV. The PC can play around with the computers and get some information about the early days of the space program, and other miscellaneous stuff. A fun Easter egg might be to put an old Interplay game on one of the computers for the PC/player to play. There has to be something in Interplay's inventory that is really small (compared to today's games) that can be put into an in-game computer.

The PC can break the TV monitor and use the broken crystal for the freeze gun.

The Bathroom has two showers, two sinks, and three toilet stalls. Perfect for cleaning up or relieving one's self. The PC can find water containers to use with making the freeze gun.

The kitchen comes complete with a packaged-food processor, cutting table, and a freezer. The freezer coils can be used to assemble the freeze gun.

This is a much slimmed down version of the Medical Facility. It basically just has one bed and medical supplies (med-kits, stimpaks, etc.).

This is where five of the eight missiles that are going to be launched are stored. The ten foot thick, red silos come out of the floor and extend into the ceiling and form two rows of eight silos each (more or less, depends what the artist comes up with). The player can access the mini-computers that are attached to each silo and see which silo has a missile in it and which do not. Some of the silos show empty because the U.S. government never got the chance to fully stock B.O.M.B.-001 before the war started. However, for those silos that have a missile in it, the player can try to sabotage the missile launch system on a per silo basis. Unfortunately, this type of Science Boy tactic takes quite a bit of time, and the likelihood of the player sabotaging more than five silos in less than two hours is highly unlikely. But, sabotaging the silos would cause a systems overload, which in turn would cause the station to eventually blow up – like a couple of minutes after the non-sabotaged missiles launched.

This airlock looks exactly like Airlock 1, but this airlock is a transition from Map 1 to Map 2 and back again. Also, there are six space suits for the PC to use on himself and his companions.