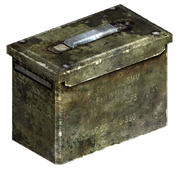 The ballot box appears in Fallout 3 and can be found inside the Capitol Building within the Republic of Dave. When the Republic is discovered by the Lone Wanderer, it is election time in the Republic and the residents are required to cast their votes into this box.

The box is locked and cannot be picked, nor is there a key that unlocks it. Dave possesses the only key, which does not appear in his inventory when he is killed or pick-pocketed. The only way to gain access to this box is to wait for Dave to open it during Election Day and access it quickly before the ballots are counted.

The ballot box serves no other purpose in the game except during the events of Election Day.

There are some codes that suggest that the ballot box originally had some set animation types different to those of a normal ammunition box (un-verified except from beta).