Berets are soft, round, flat-crowned hats, usually of woven material. Berets were worn as part of the uniform of many military and police units worldwide, including the United States Armed Forces. However, after the Great War, they are only known as part of the uniforms of the New California Republic Army and Gunners.

The New California Republic Army uses green berets to identify its officers. The beret seems to be camouflaged in various shades of green and brown and has a cap badge of the NCR two-headed bear roaring up at a gold star.

The distinctive red beret is the headgear of members of the elite 1st Reconnaissance Battalion of the New California Republic Army, with the unit insignia (metal plaque with bear skull superimposed on a pair of scoped rifles, with the motto The last thing you never see beneath) prominently featured above the left eye. It is customarily worn pushed to the right and retired servicemen are entitled to keeping their beret. 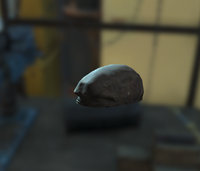