The Big Boomer is a unique weapon in Fallout: New Vegas.

The following section is transcluded from shotgun. To modify, please edit the source page.

A shotgun, also called a "scattergun", is a firearm designed to shoot a multitude of projectiles with a single pull of the trigger. This makes it very effective at hunting game, greatly increasing the weapon's hit potential. However, the accuracy and power found at close range diminish rapidly as you get farther away from the target. Shotguns designed for military use are often called "combat shotguns". Someone took the time to chop the last few inches off the barrel and stock of this shotgun. Now, the wide spread of this hand-cannon's short-barreled shots make it perfect for short-range crowd control. 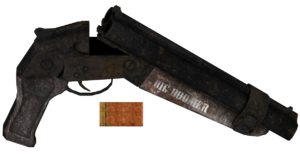 The Big Boomer is a unique sawed-off shotgun with the same break action, 12 gauge that fires both shells at a time, delivering 14 pellets at a time instead of the typical 7 of other shotguns. It is a synthetic matte black color with BIG BOOMER in white lettering printed along the underside of the grip. It is lightly damaged and worn but not nearly as much as the regular sawed-off.

Within the games files exists an unused texture for the Big Boomer.[1] It uses the Fallout 3 model and only differs from that in the color of the wood and the words "Big Boomer" written down the side of the handgrip. Possibly, since the double-barrel shotgun uses Fallout 3 sawed off texture in its model, that the Big Boomer was originally intended to be a double barrel shotgun until the double barrel was ultimately cut from the game.