Refugee camp? Is that what they're calling it? Good old NCR, they can whitewash anything. Let me tell you something, that refugee camp? It's built on the blood and tears of my people. Nobody likes to talk about it, but I remember.

The Bitter Springs Massacre was a major event in the history of the NCR and the Great Khans in the Mojave Wasteland in 2278.

The Great Khans were once one of the most feared raider tribes in the Mojave, having entered the wasteland in 2267, after relocating from NCR territories. For years they've ruled the wasteland, but they met their match when the Families of the Strip, under Robert House's tribes entered the picture in 2274. Supported by superior technology, funds, and equipment, they drove the Khans away from New Vegas, to Bitter Springs.[1][2] When the NCR deployed into the Mojave in 2274, the Khans initiated a campaign of raids against Republican holdings, considering them easy pickings. Caravans, towns, camps, all fell to the Khan onslaught.[3]

Things changed in 2278, when the Great Khans became the last significant problem in the Mojave. After the Khans kidnapped and killed four NCR soldiers, the NCR decided to cut off the head from the serpent and mounted an assault on Bitter Springs.[4] 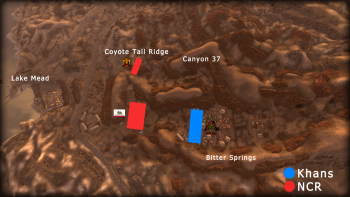 The military operation was one of the largest after the Battle of Hoover Dam, taking up nearly all of the available military resources at Camp Golf, including an elite team of sharpshooters from the 1st Reconnaissance Battalion.[5] While the primary force was ordered to attack the suspected Khan stronghold through the main pass, the 1st Recon detachment was set up on Coyote Tail Ridge, overlooking Canyon 37. Their orders were to shoot anyone emerging from the canyon on sight, to prevent the Khans from flanking the main attack force.[6]

The operation was based on incomplete intel, however, the major in charge of the deployment ordered it to go ahead, convinced that they were assaulting a Khan stronghold.[7] 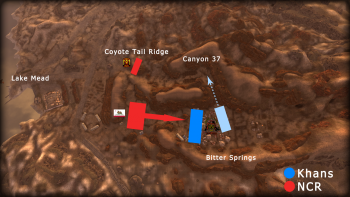 The operation went sideways from the moment NCR troops deployed into Bitter Springs. The attack force was spotted too soon and made contact with Great Khan defenders prematurely. 1st Recon troops heard an intense firefight take place, before they spotted Khans coming down Canyon 37 in groups, composed of women, children, and the elderly, followed by wounded Khans. The sharpshooters hesitated and reported the situation up the command chain. They were order to shoot until they were out of ammunition. The sharpshooters obeyed the order.[8] The retreating civilians were gunned down.[3] 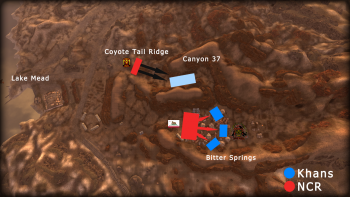 The Massacre: 1st Recon shooters gun down non-combatants at Canyon 37 as the NCR routs the Khans.

When the major in charge of the operation realized his men were gunning down women and children, he suffered a psychological shock and become unresponsive. When his second in command, Captain Dhatri, realized that his superior was no longer able to lead, he took charge of the situation. He ordered 1st Recon to cease fire and and started to salvage the operation. However, at that point, the damage was already done.[7]

The Republic's medics provided immediate medical care to all the wounded, NCR and Khan alike. The dead were buried in the Canyon where their lives ended, while the surviving Great Khans were permitted by NCR military authorities to resettle at Red Rock Canyon without interference.[9] The Bitter Springs camp was cleaned up and adopted by the NCR as a camp for refugees from the east, fleeing from Caesar's Legion.[10]

The official cause of the massacre was miscommunication. Without good intelligence and with an incomplete picture of the situation, NCR command did not realize that they were attacking a town and ordering their troops to fire on civilians.[11]

However, despite the NCR making amends, the death of entire Khan families has cast a permanent shadow over the relations between the Republic and the Great Khans. Many swore vengeance and some, such as Oscar Velasco, made good on their threats, starting a guerrilla campaign against the Republic.[12][13] Although the incident went unreported in NCR press, rumors spread fast throughout the wasteland, damaging the reputation of the Republic and its Army.[4] In some cases, NCR soldiers would be insulted as murderers when they entered towns to secure and fortify them.[14]

A separate issue was post-traumatic stress disorder. Members of the 1st Recon who fired on the non-combatants suffered major trauma, leaving military service and trying to find meaning in life again.[15] Others, like Bitter Root, a Khan child, considered the massacre a chance to begin a new life. In Bitter Root's case, he convinced himself he truly hates his parents and the Khans. Eventually, he joined 1st Recon, the very formation that was the culprit of the massacre.[16] In other Khans, the trauma of losing their family and friends took a particularly heavy toll. For example, untreated PTSD turned Chance into a mute death seeker, permanently addicted to heavy drugs to dull the pain and the memories. The impact of drugs have twisted and warped his memories, to the point that they no longer resemble reality at all.[17]

The Bitter Springs Massacre is mentioned in the graphic novel All Roads as well as Fallout: New Vegas itself.