The Bloomfield Launch Pad is a location in Van Buren, the canceled Fallout 3 by Black Isle Studios.

This impressive structure houses the identical Hermes-13 and Hermes-14 space rockets (pre completing the "return all the prisoners" quest for the Big MT). Even though the space rockets and structure have been exposed to the elements for nearly two-hundred years, they have held up quite well. However, if the player has returned all the prisoners to the Big MT (quest complete), then to the east of Hermes-13 is a second launch pad scorched by what looks like a recent launch (the Hermes-14 will have launched and not be there). The player will later find out that a group of NCR guys, led by Dr. Presper, commandeered Hereme-14 and launched into space. Currently, rust and creeks can be found all over the launch pad, but it seems that the foundation and structure are still intact. The only things keeping anyone from getting a closer look are the five high powered gattling turrets surrounding the structure, the four NCR guards, and the four security robots patrolling the launch pad. Everything on Bloomfield is powered by the sub-reactor in the Operations and Communications Building, except the turrets. The turrets are powered by their own sub-reactor underneath the center of the Launch Platform as well as its own computer control system. Accessibility is nearly impossible, except for a very well trained stealthy type (read: 100% + Sneak, 100% + Science). All others will need the access override codes which can be found either in the Boulder Dome or the Reservation. Doing so (or a successful hack) would allow the player to either shut down the turrets, or reprogram them to attack the four security robots and NCR guards.

After disabling the turrets, the player may follow the first level catwalk to the elevator. This elevator leads to the cockpit level and accessing catwalk. 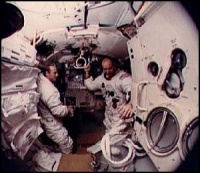 Not much happens on the catwalk to the cockpit of the space rocket. The door to enter the space rocket's cockpit can only be opened with the same code that enables launch (acquired from either Boulder Dome or the Reservation - maybe). Once inside, there is enough room for six passengers (the player may bring CNPC's). Everything about the launch and flight are automatically taken care of via the onboard computer and mission control. All the player needs to do is sit down and enjoy the ride.