This Vault-Tec bobblehead permanently improves your character's Unarmed skill by 10, to a maximum of 100. 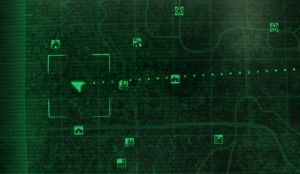 The location of Rockopolis as seen on the world map

Inside a cave directly north of Girdershade and directly west of Smith Casey's Garage. In a forked valley area whereby any of a few 'random' events will occur, look for a big rock under a string of tattered black banners.