A bunch of shut-ins who scorn outsiders and hold technology over them. Gee, where have I heard that one before?

The Boomers are an isolationist tribe of people living in the restored Nellis Air Force Base in 2281.

The Boomers are a tribe formed out of a group of vault dwellers who originally inhabited Vault 34. The overstocked, unprotected armory led to the emergence of a particularly gun-centric culture among the dwellers.[1] The Boomers were a group particularly obsessed with weapons and the right to keep and bear them freely. When the population of the Vault ballooned in the early 23rd century, the Vault's Overseer attempted to salvage the situation by introducing population control measures and sealing the armory. The efforts backfired, as rioting began, quickly turning into full-out rebellion. The future Boomers attacked the armory, taking most of the heavy weapons and equipment, then fought their way out of the vault. The reactor was damaged in the attack, dooming it.[2]

The Boomers emerged from the Vault around 2231.[3] Their superior weapons and tactics allowed them to easily defeat the disorganized, poorly equipped raiders on the surface, but the ratio of losses (43.6 hostiles killed per 1 dead Boomer) were unacceptable.[4][5]

The Boomers located Nellis Air Force Base. This pre-War military installation was hit by several nuclear weapons that avoided Robert House's missile defense network, rendering it uninhabitable due to high radiation levels.[4] Wastelanders and animals learned to avoid it by habit, leaving it in relatively good condition.[6] However, that did not deter the Boomers. Equipped with Geiger counters, they assessed Nellis and learned that much of the radioactivity has decayed to safe levels.[7] The Boomers moved in and restored the base to working order.[8][4]

The Nellis mural, showing their history.

Although Nellis was well fortified, the Boomers identified several security issues. In keeping with their social customs, they decided to patch them with extreme firepower. A large expedition was formed, which retrieved howitzers and the appropriate ammunition stockpiles from Area 2. The expedition lasted weeks, but was ultimately successful and marked the last time that Boomers set foot outside Nellis.[9] Anyone coming within a mile of the base is fired upon and destroyed with extreme prejudice.[10]

The Boomers lived and prospered in Nellis. However, indefinite isolation wasn't their goal. When Loyal, one of the tribe's Elders, found a file on the crashed B-29 bomber in Lake Mead, the Boomers' efforts became focused.[11] Recovering and repairing the bomber became their destiny.[12] To that end, the Boomers reactivated the virtual reality simulators used for pilot training before the war, using them to develop and refine their flying skills to "fly the open skies in armored safety, raining high-explosive ordnance upon ignorant savages", as the Keeper of the Story puts it.[4][13][4]

Of course, their life isn't always smooth sailing. A few days before the Courier arrived at the gates of Nellis, a hive of giant ants occupied the Nellis generator and ammunition bunker. The insects feasted upon the gunpowder reserves, which caused them to become explosive. Raquel, Master-at-Arms of the homeland, led a strike group into the bunker. The aggressive, explosive ants proved more than they could handle, leading to the loss of two Boomers and injuries to three more.[14][15] The Courier came just in time to decide the fate of the tribe, just as Mother Pearl predicted.[16] 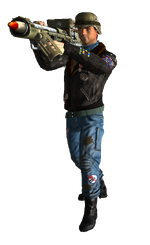 The Boomers represent an interesting merger combination of tribal customs and beliefs with technological prowess and scientific refinement. Their philosophy stems from the basic belief that personal armament is the foundation of social trust and responsibility.[17] Over the years of confinement in the vault and subsequent self-imposed isolation at Nellis, it has evolved and took the belief to its natural conclusion: personal armament also includes high explosives and their delivery systems, up to and including high explosive bombs dropped from a strategic bomber.[18] Some of the younger generation take it a step further and define the point of being a Boomer is the freedom to make explosions of any kind, the bigger, the better.[19] This has also led to the emergence of a quasi-religion centered around recovering the bomber.[4]

As part of their emphasis on personal liberty, the Boomers exhibit little social stratification. Positions of power are held by Elders, who are appointed either due to age and wisdom (Mother Pearl is the oldest Boomer in 2281, who remembers the foundation of Nellis)[16] or personal skill (Argyll is a talented doctor, while Loyal is the tribe's most capable mechanic).[20][21] The Elders aren't vested with unlimited power, but have authority in areas relevant to their skill. For example, the Master-at-Arms is responsible for the security of the Nellis homeland, from the coordination of its defenses to the training and fitness of its population.[22]

In general, this type of meritocracy and emphasis on serving the common good is present throughout the tribe. Children are trained from birth to defend themselves and serve the tribe.[23] Training in combat and farming begins from a very early age and once the Boomers come of age, they serve in whatever capacity they are best suite. As a result, every Boomer is a highly trained combatant and a competent survivalist.[21]

As part of their self-imposed isolation, the Boomers have no outside relations. They respond to anyone coming within their security perimeter with extreme firepower, regardless of who they are.[24][4] Individual Boomers are forbidden from leaving Nellis, leading to a situation where anyone wishing to contact the outside world can't, and anyone from the outside world wishing to contact the Boomers cannot either.[25]

It's just how Boomers like it, though that's not to say that they don't maintain certain relations with the outside. Once, the New California Republic shut off the base's water supply. The Boomers' response was to shell sections of the NCR's water pipeline in eastern New Vegas. The NCR promptly restored the flow.[26]

A howitzer salvaged from Area 2

Despite their tribal customs, the Boomers are one of the most well equipped societies in the wastelands. Nellis is an almost completely self-sufficient community, drawing water from Lake Mead to grow crops and provide for its inhabitants.[27][28] In order to prevent malnutrition, the standard diet of grains and vegetables is supplemented with soy and legumes for protein.[29] Power is supplied by the base's solar power station and diesel generators located in the bunker.[28] Fuel for the generators is provided by a biodiesel refinery located inside the base that uses surplus crops, like maize, to make biodiesel.[30]

The Boomers have an impressive industrial capacity and are capable of manufacturing a high volume of ammunition, primarily of the full metal jacket variety.[31] For repair and manufacture, they use advanced tools such as welding torches and plasma cutters.[32] This allowed them to amass a sizable stockpile of ammunition. For example, they have enough missiles to last five years without replenishing their stock.[33] The same isn't always true for their reserves of spare parts, particularly for the more delicate and rare technologies like solar arrays.[34]

Their military technology is equally impressive. Apart from the salvaged howitzers,[9] the Boomers have plenty of military grade weapons, including missile launchers, grenade launchers, and even Fat Man class tactical nuclear launchers. They also possess a fleet of military robots supplementing their combat power and allowing them to project their power outside the base, should the situation call for it.[35][36]

What's more, access to the base's communications also provides them the ability to monitor radio communications.[37] As mentioned above, the Boomers also have access to virtual reality flight simulators, used for flight training of various military aircraft like the B-29 and the fighter jet.[13] However, these are only allowed for Boomer use.[38]

The Boomers appear only in Fallout: New Vegas.