The Boulder Dome is a massive scientific research facility overshadowing the city of Boulder in 2253. It was built as a structure specifically designed to withstand a direct nuclear attack. Surrounding the structure are the blasted remains of the city of Boulder, what's left of them being hazardously contaminated by radiation and toxic waste.

Inside the dome lives a desperate team of scientists that have been infected by a strange disease known as the New Plague. In addition to fighting the disease, they have been trying to keep their ZAX unit from cannibalizing its memory—which contains very important research data on the New Plague—to such an extent that it stops working. Beset by glowing ghouls and a large pack of cannibal primitives, the dome faces extinction. 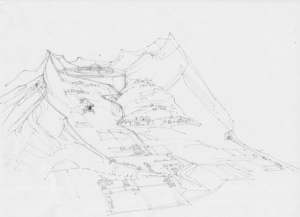 Boulder was long a place where advanced scientific research took place. Supported by money from Denver's industry and an active military presence, Boulder scientists made advances in medicine (bio-med gel was invented here), alternate energy sources, robotics, and even developed a power armor prototype. Construction of the research dome was not considered until the nearby Rocky Mountain Arsenal had a leakage of toxic waste, creating a poisonous cloud that swept through Denver, killing many. In reaction, the military funded a program to create a self-sustaining research dome, making it resistant to a nuclear attack, and having the primary research inside be dedicated to the New Plague. This "city of the future" was to be a prototype for settlements on the moon and other planets.

Then the war with China began. Boulder became a hotbed of political activity, as most of the scientists were naturally suspect of the military. When reports of plague outbreaks in Denver surfaced, many in Boulder feared that an exodus from that city would come here and infect them; they fled north, the scientists staying in a cold sleep stasis deep within the dome. When the war started, and bombs were flying, Cheyenne Mountain (a military facility, home of NORAD) was a primary target. A huge section of the mountains became a great radioactive smoking crater. Coupled with attacks on Denver and the Rocky Mountain Arsenal, Boulder was involuntarily included in a triangle of hellish death; yet 170 years later, the dome still stands.

170 years later, an NCR scientist named Goddard and his military escort travels through the region, establishing power generators and noting the locations of old-world power facilities. His report to NCR is noticed by Victor Presper, who sends him out again to investigate certain areas in the old America's southwest. After Goddard returns, Presper and a small team of soldiers investigate Boulder dome, finding it in need of repair but containing excellent labs and a fully-functioning ZAX unit. Over the next few years Presper invites or sends scientists and students to the Boulder Dome, where he explains his idea to remake civilization. Those who refuse are put in cold sleep, using technology the original Dome scientists developed to aid space travel. Presper knows he can harness the CODE (Challenge, Opportunity, Discipline, Ethics) technology developed there to convince them to cooperate anyway, but not until he needs to. Not yet known by most people, Presper was one of the scientists who woke up in the Dome after his cold sleep, nearly 70 years after the war. 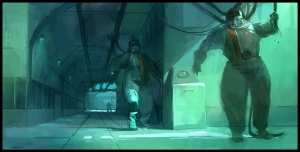 Four years ago, when things start to fall apart out in NCR, Presper sent out his last team of scientists and grad students. Agnes, a fellow NCR scientist and frequent diplomat from the scientific community to the government, is the leader of the expedition. Using her skills and a "diplomatic immunity" pass she carried, she makes her way to Hoover Dam. Two days later, the NCR Congress building is destroyed, presumably in a conflict with the Brotherhood of Steel.

The destruction of the congressional building is a severe upset to NCR and travel becomes difficult. Only by circuitous routes and careful display of her pass is Agnes' expedition able to reach Hoover Dam a year later. She runs into Goddard, a former colleague (they were both scientific advisors to NCR at one point). Goddard knows Eddie Galenski, a long-haul trucker with an armored vehicle, and together the large group makes its way to Boulder Dome. The group includes Agnes and the grad students, Goddard and his military escort, Galenski, his wife Helen, and their children. Though they lose a few students along the way, they eventually reach Boulder Dome and enter using the passcodes Presper gave them. In a strange accident the scientists and grad students are infected with a form of the New Plague and are forced to quarantine themselves from Goddard's soldiers and the trucker family; after two months trying to fight the disease, the scientists realize that they're stuck with it for now and have to live in protective suits whenever they want to interact with the rest of the Dome population. 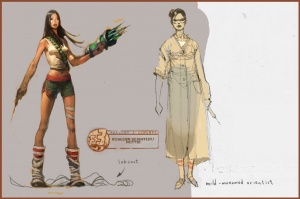 As of two years ago, things had stabilized. Everyone had a routine, mainly around constantly repairing problems with the dome (mainly from wear and neglect). There's enough to do that it keeps everyone from going crazy. The scientists worry that the soldiers and truckers might leave them, and if that happens, they're probably doomed. One of the grad students (Paul) discovers the Sleepers in a deep level of the facility – the scientists Presper sent here and put to sleep to help with his new world order. Xian starts her "hikes" and discovers ZAX.

A year ago, the first glowing ghoul showed up on the north end of town, collapsed, and died. The scientists mark the body with radioactive warnings, debate how to dispose of it (like dumping cement on it). Paul finds that ZAX is almost out of storage space at the rate he's going. With no storage space, ZAX won't be able to run the dome and will start doing damage. They need to get other storage media to hold info. (Holodisks/holotapes/holodisk tapes, all the same thing). If no solution, ZAX will have to start cannibalizing his own memory storage, eating Boulder research as he does so.

They start hearing some broadcasts from Denver, but don't answer because they fear being attacked (esp. from diseased people).

8 months before the PC arrives: Two glowing ghouls show up within a three-day period. The soldiers start getting paranoid, thinking they're in ghoul territory. Sgt Larsen, going stir-crazy, wants to take some Rad-Away, find the ghoul colony, and kill them all. Goddard says no, but Agnes suggests he consider it to let them "let off some steam." 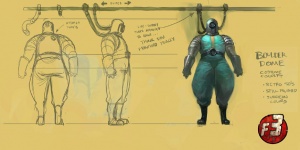 6 months ago: Galenski is told they need storage (by now they basically need a "datacan", though holodisks will help stave it off). He makes a run west to find some but fails. While out he runs into a pack of Jackals, kills all but one, and heads home. The lone Jackal runs to his tribe and tells them about the truck, the man, and where he went. The Jackals stop fighting among their own tribes and move out in search of this new food source. Jimmy T the super mutant (found later at Denver) is with them.

Another glowbug shows up. Larsen's team is given RadAway and start doing patrols. Agnes says taking RadAway for too long is dangerous. Larsen realizes that means they won't be giving it to them any more, so he starts exaggerating how many ghouls they find so they can justify getting more RadAway to deal with them.

Jimmy T leaves the Jackals because he knows the Daughter of Hecate probably doesn't want him around and he doesn't want to be a sacrifice.

Wagner (the ghoul from Denver) shows up in Boulder, scouting around the outskirts, but is driven off by shots from the soldiers who assume he's a glowbug. Wagner realizes things are hostile toward ghouls here. He scouts further south (and checks out Rocky Mountain Arsenal on the way to Boulder).

4 months ago: Galenski makes a run to Denver in response to the radio transmissions. Surprised, he finds the salvagers have a lot of good stuff. He trades them ammunition, minor tools, and medical supplies in exchange for dog meat, computer chips, and holodisks. On the way back he faces some Jackals but fails to kill any of them.

Problems continue between the scientists and the soldiers. Larsen and his men succumb to addiction and their addiction is apparent. 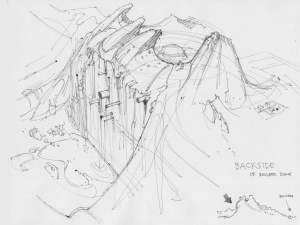 3 months ago: Jackals organize in strength in this region. Though they originally try attacking the dome, they quickly realize the truck is an easier target.

2 months ago: Problems with the soldiers get worse. Patrols become erratic. Larsen becomes paranoid. When another ghoul wanders in, the scientists accuse the soldiers of not doing enough, or anything at all. Larsen pulls a gun on a scientist and tells them to surrender their med supplies for "one last patrol." Goddard aggress, and secretly decides to close them outside to starve and die. He only tells Agnes about this "exile" ... the others just think they haven't returned.

1 month ago: The soldiers return to find the dome sealed up. At first they think it's a mistake, then they realize it's not. They pull out of Boulder to avoid the Jackals, and end up in a guerrilla state in the nearby mountains, looking for tunnels into the Dome. After two weeks the soldiers are starving. One of them freaks out, and Larsen shoots him, then offers the body to the Jackals. The soldiers and the tribes became allies, both wanting to get into the dome. Soon after, the soldiers use the last of their RadAway, and by the time the PC shows up they're in their 7th day of withdrawal.

5 days ago: Presper and his men arrive, shoot some jackals, hide in the truck, slip into the Quarantine Center, and seize Helen, Galenski, and the kids. There's a big fight with Pierce and Helen, as they recognize each other (they used to be lovers, and he's the father of at least one of her kids).

4 days ago: Presper realizes his datacan is of the wrong type, or can't be used to save ZAX without destroying all the data on it, which he's not ready to do yet. He starts to run some other calculations and waits around for those to finish. It's during this time (in Part 1) that the PC would arrive; if the PC doesn't arrive until Part 2, Presper & Co. are gone and things are a little back to normal, at least normal for here.

When the inner dome got shut down, Xian was trapped outside. The scientists are angry because they don't know how to get her back in. When the PCs meet her, she's almost out of oxygen but she won't open her suit. Why? Because she doesn't want to contaminate the PC. Coleridge agreed to come here (1) because Presper told him it was a safehouse just in case NCR & BoS went to war, and (2) he needed the satellite if he wanted to wage war on NCR. The NCR guys spotted Galenski's truck, used it as a Trojan Horse, used it to enter the quarantine center and capture Galenski. Helen thought they were going to kill Galenski so she pretended to throw in with them. Once inside they took control of the outer perimeter, and Presper was able to talk everyone into a conference via video monitor. Presper finds out that some scientists didn't make it to Boulder and realizes he's short on the number of people he needs.

Goddard is keeping stuff secret from Presper: the research, the presence of Larsen outside. He knows Presper wants the PC dead. He doesn't trust Presper and suspects that Coleridge may have been responsible for the attack on NCR congress.

The Boulder Dome did not appear nor was mentioned in any of the published games, but was to appear in the cancelled Fallout 3 project by Black Isle codenamed Van Buren. It is not certain if it will appear in any future Fallout game.