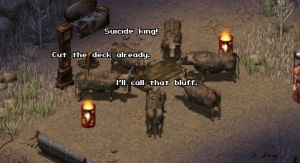 Brahmin Poker is a special encounter in Fallout Tactics. You meet a bunch of brahmin playing poker in the middle of the wasteland. Prior to walking towards the group of brahmin the floating text is a humorous allusion to what would normally be said during a poker game. If the player gets too close the brahmin run from the scene saying among other things: "Holy Cow! Its the feds!" implying that their poker game is illegal. The money left on the table is roughly about 30,000 ring pulls.

This is a parody on Dogs Playing Poker, a painting by Cassius Marcellus Coolidge. The original painting contains dogs dressed in suits, smoking cigars, and playing poker. It also shares similarity with cyberdogs playing poker in Old World Blues with Wild Wasteland trait.