Broken Hills is a mining town, uranium mostly. It can be a rough place, so watch yourself.

Broken Hills is a mining town in the western part of the pre-War state of Nevada. After the Great War it became a haven inhabited by humans, super mutants and ghouls, living together in relative harmony (or so it seems). It is located twenty squares east and fifteen squares south of Arroyo.

Shortly after the Master's defeat, Marcus wandered aimlessly until the summer of 2185, where he encountered Jacob, a Brotherhood of Steel Knight in power armor who had pledged himself to the extermination of all mutants. Marcus and Jacob fought for a day or two, but they soon realized the futility of their battle and became friends (though Marcus always thought that Jacob would have been improved by a dip in the FEV vats, while Jacob disagreed, which was always a bone of contention between the two). As they wandered through the wastes, they attracted a following of other refugees from the war, who believed that Marcus's strength and Jacob's power armor gave them the closest thing available to safety. Eventually, Marcus and Jacob led the refugees to settle in Broken Hills to exploit the uranium mine there. Jacob eventually moved on for parts unknown in the spring of 2186, while Marcus settled down and became the sheriff of the up-start town.[1][2][3]

With the mine in operation, Broken Hills quickly experienced economic progress as the town started establishing trading relations with its neighbors, chief amongst them the town of Gecko, whose reactivated pre-War nuclear power plant was always in need of a steady supply of uranium.

In 2242, the town was visited by a tribal known as the Chosen One. The stranger exposed the existence of a anti-mutant conspiracy formed by bigoted humans who were planning to rid the town of Ghouls and Super mutants. He thereby earned the loyalty and friendship of Marcus, who joined him on his quest.[4] Marcus returned to the town some time later, having helped the tribal complete his mission.

With the destruction of the conspiracy to destroy the mutants, Broken Hills began to thrive, but faltered when the uranium mine ran dry. The city, having lost its sole reason for existing, slowly dispersed. The residents carried their riches with them, leaving the place a wind-swept, desolate ghost town. A few hold-outs remained, attempting to eke out a pathetic existence, but eventually, they too, disappeared.[5] Finally Marcus, seeing his post as sheriff as having outlived itself, also left the place behind, wandering east towards the great mountains in search of fellow super mutants.[4]

Broken Hills is a uranium mining community home believed to have hundreds of residents.[6] Despite such a large population of human, ghouls and super mutants living in unsegregated surroundings, it is not always easy for them to live together. This has culminated in a conspiracy to rid Broken Hills of its mutated citizens, led by human purist and chemist Jacob. The conspiracy has resulted in the arrest and incarceration of several of Jacob's supporters as well as the murder of several civilians; their bodies have been dumped in the town's caves and sewers in hopes of destabilizing Broken Hills and accelerating conflict.[7] Jacob also sabotaged the mine's air purifier temporarily halting mine operation. He ultimately hoped to detonate the purifier and bring the whole mine down on all the super mutants working inside.[8]

In opposition to Jacob are the mutants, mine foreman Zaius, and the arm wrestling champ Francis. Political intrigue is never simple, though; there is also a conspiracy on the mutant side, instigated by Francis who hopes to drum up pro-mutant support by framing the anti-mutant faction in the town for the deaths of the townspeople.[9]

The Broken Hills uranium mine is worked by the town's super mutant population. The radiation in the mine has minimal effect on them and their great strength aids in the physically taxing labor. The mine does require an air purifier, however, as toxic gas build-up makes the mine inoperable unless it is regularly filtered. The town's life blood comes from the uranium mine. Broken Hills has its own operational refinery operated by ghouls. If you can purchase uranium ore from a caravan, the refinery will produce refined uranium for you. The town is powered by a small reactor that runs off of uranium slugs and produces ample power for the community. The uranium trade runs to the NCR and Vault City as well as trafficking brahmin Herds across the wastes. The uranium trade is so important to so many towns' existence that even Vault City will check their unrelenting bigotry for outsiders and mutants and trade valuable medical supplies and money for uranium ore. Ever since the mine's air purifier broke down, uranium production has halted, leading to an economic crisis in Broken Hills.

Random encounters in the Broken Hills area feature Unity Patrols of humans, ghouls, and mutants that are friendly to players with positive Karma. 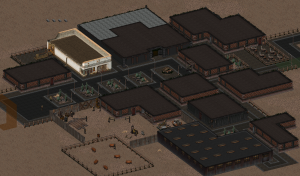 If anything, Micky's presence well indicates a broken Broken Hills economy - make sure to talk to him on your way into town. Ghouls operate the uranium plant which is located downtown. Marcus can be found out front of the jail, and players in need of work be sure to check out the caravan office, operated by Bill. Liz runs the general store in town. 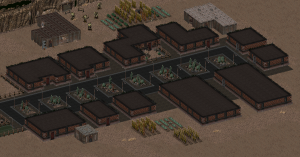 Broken Hills offers a resort-like setting for unprejudiced, mutated, and motivated individuals looking to make a fortune mining for Uranium. Once threatening, dangerous mutated cacti from the wastes have been placed into pens to make attractive lawn-spaces along the length of the main street. The residential area houses ghouls and super mutants, as well as one scientist and his chess-playing radscorpion, and a talking spore plant. 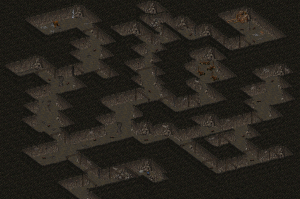 The Broken Hills uranium mine is worked by the town's super mutant population. The radiation in the mine has minimal effect on them and their great Strength aids in the physically taxing labor. The mine does require an air purifier, however, as toxic gas build-up makes the mine inoperable unless it is regularly filtered. The town's life blood comes from the uranium mine.

The underground is a base for ants mostly, but some super mutants (like Francis) saw some people in the underground. The Chosen One discovers that many people died here because they were super mutant haters and wanted to get rid of them. See Find the missing people for Marcus.

Broken Hills appears in Fallout 2 and is mentioned in Fallout Bible and Fallout: New Vegas.