From The Vault - Fallout Wiki
(Redirected from Brotherhood of Steel (West Virginia))
Jump to: navigation, search

Brotherhood of Steel in West Virginia is the result of Capt. Roger Maxson's Brotherhood in New California's Lost Hills reaching out via satellite across America, all the way to Appalachia.[1]

The origins of the Appalachian chapter are closely tied to Taggerdy's Thunder, a US Army Ranger unit led by Lieutenant Elizabeth Taggerdy. Deployed to war games organized in Appalachia in October 2077, Taggerdy led the Thunder against a unit of United States Marines. As usual, Taggerdy planned for a hard and fast attack, hugging the edge of the exercise area and striking where the Marines were least expecting it. She never got the chance to execute that strategy, as the Thunders were surprised by the Great War. After first dismissing the attacks as part of the simulation, the nuclear warheads that struck Appalachia soon revealed that war came home.[2]

With the chain of command in tatters and nothing but static on the radio, they attempted to raise any kind of ranking officer to receive new orders and move forward through the desolation of the nuclear war. What Taggerdy didn't expect to find on the radio bands was Captain Roger Maxson, looking for someone in Appalachia. Although she was hesitant about speaking to a confessed traitor, her friendship made her decide to give Maxson a chance. The fact that the U.S. Army apparently disappeared in nuclear fire overnight played a key role in the decision.[3] Together with her unit, Taggerdy moved to Camp Venture, an old survival training camp, where they spent the dark winter of 2077.[4] Soon after, she ordered the camp reactivated to fill out the ranks of the Thunder.[5] Due to the strict requirements posed by the drill master, only four recruits made it through to the end of training and became members of the Thunder. However, they were far from the only ones and soon recruits started appearing at the Camp in numbers, primarily former soldiers looking for a way out.[6]

That way out presented itself when Captain Roger Maxson announced the foundation of the Brotherhood of Steel. Although Taggerdy was hesitant to accept a completely new system of ranks and ideas, believing that the military training and loyalty to commanding officers was enough to carry the day, she did not object, at first treating it as an order like any other.[7] Although Taggerdy was skeptical, Maxson outlined his plan to give her and her men a new identity as members of the Brotherhood, both as a way to return meaning to their lives and combat the overwhelming depression that threatened to take what few survivors made it through the nuclear fire and to immunize them to the authority of any politicians that might emerge from the Vaults (or in Appalachia's case, the Whitespring Congressional Bunker) and set fire to the world again. Taggerdy accepted the new orders without believing in them at first, but soon grew into her role.[8] 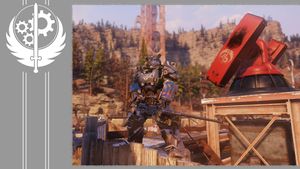 A Brotherhood Knight standing watch with a .50 cal machine gun.

Paladin Taggerdy was known for only recruiting from those who had military experience and found it difficult to coordinate with the other, more "civilian" factions in Appalachia.[9] This became apparent in their dealings with the Responders and Charleston: By October 2082, the Brotherhood appeared on the verge of conflict with the Responders, as they requisitioned munitions while the Responders were trying to contain the Huntersville mutant threat. Although they eventually acquiesced to the demands, it did the relations between the factions no favors.[10] However, the relations eventually normalized, especially since the Brotherhood had other problems (as did the Responders, due to the great Charleston flood in December 2082). The Brotherhood's numbers and new classes graduating from Camp Venture exhausted the available space at the survival camp, necessitating improvised measures. The Brotherhood decided to expand south into the Cranberry Bog, opting to seize the defunct Allegheny Asylum as their new base of operations. Although plagued by feral ghouls, the building was structurally sound and had a direct connection to the Thunder Mountain Power Plant via landlines, wrestled from the Free States by Taggerdy's troops.[11] Although the Asylum provided enough space to grow into, they soon encountered problems: Scorchbeasts, first as unknown bats flying in from Watoga, easily scared away by miniguns. This was chalked up to Bog weirdness at first - a grave error.[12]

West of the mountains, the Brotherhood forged alliances. The Brotherhood and the Responders united together against the super mutants, fighting a bitter battle to contain the mutants that ultimately ended in a major victory.[13] The campaign ended in May 2086, marking the high point in Responder and Brotherhood relations, although it claimed many lives, including Squire De Silva and Paladin Swafford.[14][15] Congratulating them on their victory, Elder Maxson also announced a new mission for the Brotherhood: To act as preservationists, keeping the embers of civilization burning, so that the Brotherhood may become the catalyst for a new, better civilization in the future.[16]

Some responded to this new policy with enthusiasm, others with grudging acceptance, and yet others, like Sergeant Hank Madigan, left the Brotherhood to join the Responders. The new mission quickly took a backseat, however, as the Brotherhood encountered the scorchbeasts and the scorched in the Cranberry Bog. Conferring with Maxson's ace researcher, Scribe Hailey Takano, the Brotherhood in Appalachia quickly calculated that the scorchbeasts represented a potential extinction event for humanity. Lost Hills supplied a number of designs and weapon schematics to help stem the tide, including a sonic generator and an automated research program, but by the 2090s, the failing infrastructure of the Old World rapidly rendered communication impossible. Before being cut-off, Maxson ordered Taggerdy to hold the tide - and proscribed the use of nuclear weapons.[17]

Camp Venture was officially abandoned on July 20, 2093, as the Brotherhood tightened their belt and pulled all remaining troops to focus their firepower at the Allegheny Asylum and Thunder Mountain Power Plant. The remaining Squires completed their training, though no new candidates were accepted at this point.[18] The Brotherhood focused on fighting the scorchbeasts entirely, tapping all available sources of supplies, taxing their good will. By January 2094, that meant routinely requisitioning food, dozens of missiles, fusion cores, and hundreds of rounds of conventional ammunition from all available sources.[19]

Realizing that time was not on their side, the Brotherhood launched Operation Touchdown on January 29, 2095, with Paladin Taggerdy taking the most well trained troops of the Brotherhood in order to confront the scorchbeasts in their lair and destroy them. The operation claimed the life of Paladin Taggerdy and her men, but for over a week, no scorchbeasts appeared on the surface, leading Senior Knight Wilson to declare a preliminary mission accomplished.[20] However, this proved to be optimistic. By June, the sightings continued to increase in number, indicating that Touchdown has failed.[21] By August, the situation was clear: The Brotherhood has failed in its mission and was rapidly approaching extinction. Rather than flee, the soldiers decided to continue manning their posts until the bitter end, trying to buy as much time for Appalachia as possible.[22]

By August 18, 2095, the Brotherhood was down to Scribe Grant and a handful of surviving knights. They made their last stand at Fort Defiance. Thunder Mountain fell on August 19, completing the destruction of the Brotherhood.[23] With their deaths, the Brotherhood in Appalachia was extinguished, leaving behind a bounty of weapons and the automated defenses for those who would come after to try and fight the scorchbeasts.[24]

Another difference is the emphasis on the military aspect of the organization. Taggerdy was famously distrustful of civilians, considering them to be weak links in the chain, and that attitude translated into their dealings with non-military factions across Appalachia, making cooperation difficult. The landmark battle of Huntsville and Maxson's Preservation of Technology speech that introduced a new mandate and elevated Scribes like Grant as equals of the Knights changed the internal organization of the faction, but not, unfortunately, the general attitude that prevented effective cooperation and confronting the scorchbeasts.

Originally nothing more than a Rangers combat unit, Taggerdy's forces eventually exercised limited control of a number of strategic locations across Appalachia, including Thunder Mountain Power Plant, Camp Venture, Fort Defiance, and a network of air defense sites ringing the perimeter of the Cranberry Bog:

Like its parent organization in New California, the Appalachian Brotherhood of Steel was the most advanced faction in Appalachia, especially after the Enclave under Thomas Eckhart went extinct. It used standardized weapons and uniform, and most importantly, had access to a large number of T-51 power armor suits that were standard issue to ranking Knights, after completing their training at Camp Venture under Senior Knight Ted Wilson.[26] The Brotherhood also made use of a number of surviving VB-01 Vertibirds to police the Cranberry Bog against the scorchbeasts,[27] and utilized numerous Automated Surface-To-Air Missile turrets to combat the scorched both in the air and on the ground. Augmenting their firepower was a broad array of research and recon tools provided by Lost Hills and Scribe Hailey Takano, including an Automated Research Program for analyzing scorchbeast DNA for weaknesses,[28] sonic scanning module for tracking down the echolocating monsters using their unique frequencies (which provided the intel necessary for Operation Touchdown),[29] and even tentative designs for a modified T-51 power armor utilizing ultracite to enhance its combat performance.[30]

The chapter appears in Fallout 76.