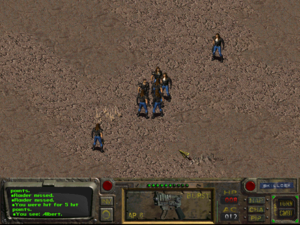 Surrounded by raiders, the Vault Dweller uses the MP9 in burst mode. 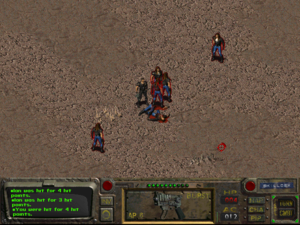 Two raiders are killed with a single burst, easing up on the damage.

Burst shot is an attack that fires multiple bullets at the target.

A burst shot uses up multiple units of ammunition, trading accuracy for firepower. The chance to hit, damage, and critical hit chance is calculated for each bullet individually, allowing for burst shots to deal tremendous amounts of damage: A single burst from a 10mm SMG fires ten bullets, potentially giving ten times the damage of a single shot for just one AP AP more (this is changed up a bit in Fallout Tactics, as each bullet deals -10% damage as opposed to single shot).

However, there are two major drawbacks: