Buster's Fine Emporium of Armament is a small gun store run from a tent by the name sake, Buster, in New California in 2241. 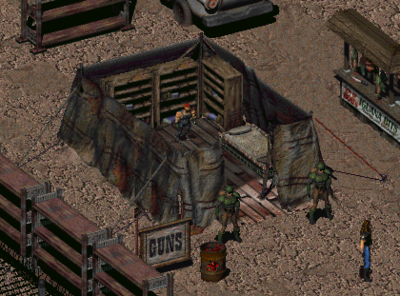 The store, which consists of one tent, is next to Son of Bob's Iguana Bits and is guarded by two men in combat armor. Buster resides inside the tent and will sell weapons to the Chosen One as well as a scope for the hunting rifle. The tent is surrounded by shelves with what seems to be duffle bags, probably containing stock. There is one further guard stood guarding one set of these shelves.