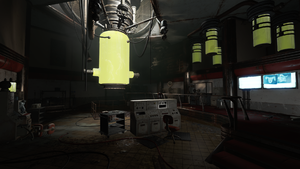 CODE Conditioning Protocol[1] was a pre-War medical procedure developed in the United States, designed for conditioning humans who underwent brain extraction (i.e. the brain) and preparing them for implantation in a Robobrain chassis (whether combat or janitorial). The principal means of achieving this was by flushing short and long term memory, eradicating the personality.[2]

Originally developed at Boulder Dome for Robobrain manufacture, CODE used a machine language designated Visual Standard. It's distinct in that it relies on optical relays to transmit data, which allowed it to be adapted for use with any creature capable of vision, including humans. After minor adjustments, CODE was harnessed for social control: Brainwashing soldiers and civilians so that they can't be brainwashed by the Chinese. It was also used to recondition conscripted prisoners for frontline service and increase the morale of already deployed forces by using live feed helmets.[3]

A number of handheld devices were developed to use the CODE in the field. These were usually cameras with powerful flashbulbs, creating a flash that transmitted the commands. Victor Presper had one such device, with HALT commands printed on flash cards, and planned to use it to round up prisoners, infect them with the New Plague, and spur ODYSSEUS into action. As part of his plan relied on Boulder's frozen staff, he also planned to turn their invention on them, should they disagree with his plans.[4][5]

CODE was originally designed to appear in Van Buren. It found its way into Fallout lore by means of Automatron and the RB-2851 terminals, more than 13 years after the game was cancelled.