Canada was a country before the Great War, annexed by the United States for its vast natural resources.

The process of annexing Canada began in 2059 as the Anchorage Front Line was established in Alaska to protect its natural resources, especially the crude oil fields, from the People's Republic of China. As parts of the Alaskan pipeline cross Canadian territory, the U.S. government pressured the Canadian authorities into allowing American military units to station near the pipeline and provide security.[1]

The process of annexation began when the Canadian government caved in and granted permission in 2067,[2] after the Chinese invasion of Alaska in 2066. The United States military did not limit its activities in Canada to just guarding the pipeline. Despite Canadian protests, the country's resources were exploited and stretched to the breaking point to support the American war effort. By 2069, Canada became Little America in the minds of U.S. citizens, with vast stretches of timberland destroyed beyond recovery.[3]

The tipping point came in 2072. As the U.S. escalated its exploitation of Canada's resources, her people took to the streets. Protests and riots erupted in several Canadian cities. When an attempt to sabotage the Alaskan pipeline was foiled, the U.S. military officially announced the annexation of Canada on June 3, 2072.[2][4] In a statement to the press, General Buzz Babcock, commander of U.S. forces in Canada, cited security concerns as the primary reason for the annexation. He also derisively stated that "Little America" was always the property of the United States.[5] 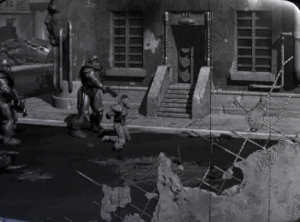 By 2076, the annexation was complete. Canada ceased to exist as a state. The provinces occupied by the American military became U.S.territories, remaining under its political and military control, but not a state or commonwealth in their own right.[6] As the Alaskan pipeline swarmed with American military units, security detachments equipped with cutting edge technology brutally clamped down on the Canadian population and the resistance movements, formed out of Canada's armed forces (complete with armored vehicles and modern combat armor).[7][8] Open warfare between the opposing armies was a fact, with Yukon becoming one of the many fronts in the Resource Wars.[9]

Protesters, rioters, and resistance members alike were shot on sight, sometimes even executed on camera.[10] When pictures of the atrocities committed in the name of the United States made it over the border, they sparked unrest and protests from the American public.[11] Even among the military, the annexation is met with mixed reactions. For some, the criminality of the takeover is just sickening.[12] But life went on and the powers that be ignored the outcry, with propaganda portraying the annexation as "liberation."[13] One corporation in particular sought to bank on the annexation: Vault-Tec began advertising Vaults as available in newly-annexed Canada,[14]

When the Great War delivered a merciful bullet to the corrupt empire, Canada was rendered free at the expense of a global societal collapse. However, Canadians survived. Ronto remains a major settlement in Canada, known as far south as The Pitt, while Canadians continue to come down into what was once the United States, either migrating in search of their fortunes[15] or drawn by trading goods making their way north from eg. New California.[16]

Canada is mentioned in some form in all Fallout games. It was going to be used as a setting in the cancelled Fallout Extreme.