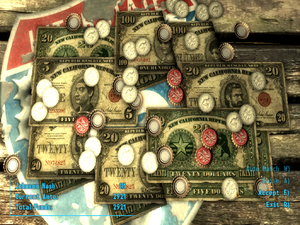 It's a two-player game, and the winner takes the whole pot. You build a "caravan" using the cards in your deck. The goal is to create caravan bids that beat your opponent's bids, so there's more strategy than luck involved. It's why you won't see Caravan in any casino - too slow-paced, and more importantly, no house edge. Here, take this holotape - it goes into more specifics about the rules. You'll also need a deck, so take one of my spares. So... you feel like playing a game?

Caravan is a popular card game invented after the Great War by merchants and caravaneers on the West Coast. Caravan was designed by Obsidian Entertainment specifically for Fallout: New Vegas.

Obtaining a deck and additional cards

A free 54 card starter deck and game instructions can be received from Ringo in Goodsprings. This deck is composed of 53 of the 54 cards from the The Tops' set (There are 2 King of Diamonds, the King of Clubs is missing). Additional cards can be obtained from various merchants and corpses across the Mojave wasteland, or by beating Festus at Lucky Horseshoes, or alternatively you may find cards in the Sierra Madre should you have Dead Money installed.

At the outset of the game, the opponent will place a bid. The player can then either match or raise it. Non-player characters will not match every bid, only raising to about 50% of their initial bid. The player can bid any amount they want, limited only by their opponent's bid and the amount of money they have.

Prior to beginning the game, the player is presented with the "deck creation interface". This interface consists of two rows of cards, both representing every card in the deck. The visible cards in the top row represent the playable deck, while the bottom row are the unused cards.

A deck is created by moving cards from the bottom row to the top row using the Add button. Cards can also be removed using the Remove button. The "Randomize Deck" button will randomly select cards, creating a new caravan deck each time from all the available cards in your total card pool. Once the player is finished creating their deck, they can move on to the game. The finished deck will be saved and cannot be edited until the next time Caravan is played.

Caravan is played with two players building three opposing caravans (or "bids") of numbered cards. The goal is to outbid the opponent in all of the three caravans by keeping the number of points on each of above 20 and below 27 (21-26) while preventing the opponent from doing the same.

The game begins with each player taking eight cards from their deck and placing either one numerical card or Ace on each of their caravans. A player may not discard during this initial round. (This is currently bugged, see Bugs.) Once both players have started their three bids, each player may do one of the following on their turn:

After the initial card is played, the following card determines the direction of the caravan, either ascending or descending numerically. All subsequent cards must continue that numerical direction and/or match the suit of the previous card. Playing a same-suit card will change the direction of the caravan, if applicable. Cards of the same numerical value cannot be played in sequence, regardless of suit. Face cards and Jokers can be attached to an Ace or numeric card in a caravan (including your opponents') and affect them in various ways. A total of three cards may be attached to any given regular card, after which the only way to remove that card is through the use of a Joker or discarding the entire caravan.

A player's caravan is considered sold when the value of its cards is over 20 and under 27. The opponent may still outbid by increasing the value of their opposing pile while staying within the 21-26 range. The game ends when each of the competing caravans is sold to either the opponent or the player, with the victor providing a better bid for at least two of the caravans.

In the event of a tie between any two matched caravans, the game continues until one side has a better bid. The player with two or more sales on their side at the end of the game wins the pot. If either player runs out of cards to discard before a winning condition is met, the player will not be able to discard and will be declared the loser regardless of how many winning caravans they have.