Carbon is a town built over the remains of the pre-war city of Carbon, Texas and the first place in Fallout: Brotherhood of Steel. It's a small community of farmers and breeders of brahmin. A real town of Carbon, Texas exists but it is not known if this is the same town.

The town was governed by a mayor named Richard until deposed by the Initiate and replaced with Vidya. Carbon is located right next to a large crater that was caused by the Great War and half of the town fell into it. While the town itself is split into east, west, north, and central, the town center if the only part the player can access when not involved in a quest. The Brotherhood of Steel sent an Initiate to Carbon on his first mission, to find and assist several Brotherhood paladins believed to be in the town.

Carbon is divided into eight areas. 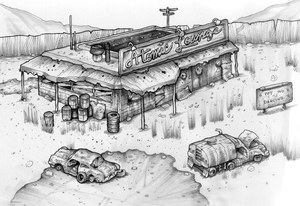 Carbon Bar is owned by Armpit. Once it is liberated by the Initiate from a group of local raiders it is open for normal business. Once reopened a Wasteland Stranger, Ruby and Armpit himself can be found inside. The bar was burned down when raiders came again to destroy the whole town, and it's owner died near the door of his own place. Before the travel of the Initiate to Los, the Carbon Bar is restored, but is closed.

Carbon Crater is a giant hole in earth near the town of Carbon. It is filled with ruins of building and cars, as half of the pre-War Carbon ended up there. Before the war, a large facility specialized in hazardous materials and some mining plants were located here.

Carbon East is one part of Carbon. There was here a few houses and a storage facility for hazardous materials. The area is protected by raiders and contains many of the townspeople who are under attack from the Raiders during Town Under Attack, and is only accessible during that quest.

This area exits to Carbon North, and back to Carbon Town Center. 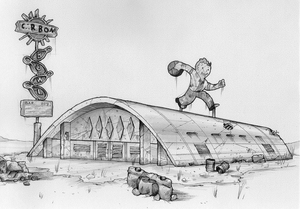 One of the mills
Main article: Carbon Mill

Carbon Mill is a great industrial area. The place consists of some exterior streets, a railroad, and a parking lot. A large mill is also present and was the main base of Jane's raider group that lived in Carbon.

It consists on several sections accessible from the Carbon warehouse. These include the railyard, exterior streets, the parking lot, storage area, the generator, offices, and the grinder.

The mill can only be accessed after receiving a key from Jesse after initiating the Defeat Raiders quest. Once the Initiate makes his way to the parking lot, they will again find Jesse. He gives the player some advice and jokes that Jane makes her home in the grinder due to enjoyment she receives from the vibrations.

Carbon North is an area of routing and traffic. There are plenty of roads and major rail route for various needs in the city and the mill. The area is protected by raiders and contains many of the townspeople who are under attack from the Raiders during Town Under Attack, and is only accessible during that quest.

This area exist to Carbon West, and back to Carbon East. 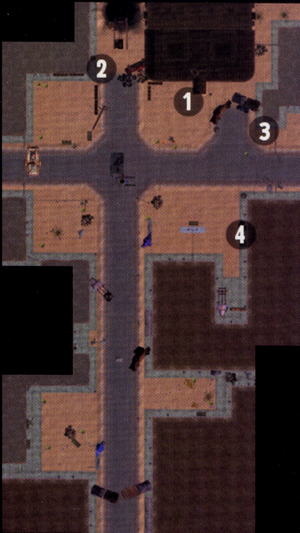 Carbon Town Center is the most important part of the city and used to be the commercial area of the city.

During the quest Town Under Attack the east-west road on the map will have exits to Carbon East and Carbon West, with only the west exit being immediately available.

Carbon warehouse is a pre-War warehouse of hazardous materials, connected to a facility which stood on the place of Carbon Crater in the past. The Initiate is asked to clear the house of radscorpions, and later, when the raiders attack Carbon, the warehouse becomes a place of hiding for majority of the population.

Carbon West is a small part of the city. This section contains several roads and two large homes. The area is protected by raiders and contains many of the townspeople who are under attack from the raiders during Town Under Attack, and is only accessible during that quest.

This area exist to Carbon Town Center, and back to Carbon North.

Carbon appears only in Fallout: Brotherhood of Steel.