The Cathedral is the holiest site of the Children of the Cathedral and the seat of power for Morpheus and other leaders of the faith. It doubles as a facade for the Los Angeles Vault, concealing the Master's headquarters.

It is located in the Boneyard, one square west and nineteen squares south of Vault 13.

The building that would become the Cathedral dates back to the pre-War times. It likely belonged to the Vault-Tec Corporation and was used in conjunction with the technology demonstrator Vault built below its foundations. The Vault was fully functional and when the Great War came, it was used to full effect. The survivors would emerge after 15 years, in 2092, helping found the Los Angeles Boneyard.[1]

In 2152, after Morpheus and his doomsday cultists pledged allegiance to the Master, the Cathedral was turned into the central church of the newly formed public face of the Unity.[2] The Children were formally established in 2156, starting to spread out into the wastelands from their new Cathedral, adapted from its pre-War role.[3][4]

As the heart of the Children's religion, the Cathedral was frequented by numerous visitors, chanters, enforcers, and even zombies, failed candidates for Servitors, brainwashed and released into the Cathedral to support the cause with what remained of their minds.[5] The massive main chapel, with its ceiling lost in darkness, was used to display holographic images of the Master to the faithful, inspiring awe in the assembled. The holo-projector, hidden beneath the podium, was not common knowledge and most interpreted it as a supernatural apparition. Father Morpheus, the leader of the Children, would occasionally give sermons in the main nave, though most of the time the faithful had to contend with a giant monochrome display reciting dogma at a feverish pace.[6]

Visitors could purchase souvenirs at the Cathedral shop, receive treatment from the infamously foul-mouthed Dr Wu, and even seek spritiual guidance from the many thinkers meditating in side rooms and chapels... Or at the end of Father Lasher's prod. All of this ceased when the Cathedral was destroyed on March 3, 2162, as the Vault Dweller assassinated the Master and the Vault, together with the building above, was engulfed in nuclear fire.[7] 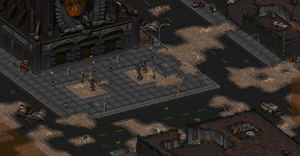 The entrance. Followers appear from the west, if recruited at the library.

Rising from among the sea of ruins, the Cathedral is almost pristine. Together with the destruction and erosion of the shoreline, it would likely qualify as a seaside property. Various children devotees, enforcers, and chanters mill before the entrance, under the stony gaze of a radiation angel defiantly posing over the ornate entrance.

Named characters include Slummer, Zark, and Calder, though they offer little in the way of assistance and act mostly to give flavor to the location. If the player convinced Nicole to aid in the attack on the Cathedral, four Follower scouts will appear from the west. They all wear metal armor (unlootable) and are equipped with spears (two of them), a sledgehammer, and a Ripper.

The main section of the cathedral has a cruciform layout, inspired by Christian cathedrals. The main nave contains an atrium, which leads to a narrow passageway flanked by side chapels and meditation rooms. Laura is in the chapel to the west, while Viola is in the meditation room to the south of the chapel.

The main chamber is filled with benches for the faithful, all facing the central altar with a podium used by Morpheus for his speeches and in his absence replaced by the large monitor in the back. Sister Francis and Ton, who lead the Children's enforces, stand by the locked entrance to the Cathedral tower, requiring a red Cathedral badge to enter.

To the northwest is Father Lasher, in the rectory, whose office doubles as his quarters and study chamber (or cattle prod lashings). South of it is the dormitory and the infirmary staffed by Dr Wu. The opposite end contains the Cathedral gift shop and a small maintenance chamber with a nuclear generator hooked into the Cathedral's power grid.

The storage room in the back is only accessible with the black Cathedral badge and contains the stairs leading down into the basement and the hidden Vault entrance. 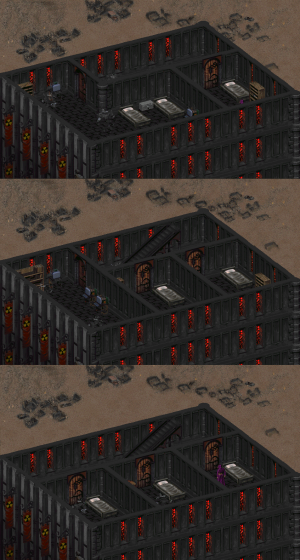 The tower, or the Inner Sanctum, serves as the living quarters and offices of the ranking members of the Children of the Cathedral, accessible only to them, their Servitors, and the nightkin. The Cathedral has three floors and nightkin protect them. They will attack if the player has any followers, or trespasses (as in, does not have a red badge or does not wear the purple robes). Fighting on one floor does not turn characters on other floors hostile and will not affect relations with people on the main Cathedral map.

The first floor has Dane, the stark raving mad servitor, and two nightkin in the chamber to the west. The next one has two bedrooms and a library with Mach IV computers, and three nightkin. One of them faces the stairwell.

The top floor has Morpheus in the easternmost chamber and a large barracks for nightkin. The footlocker contains the unique Tesla armor. 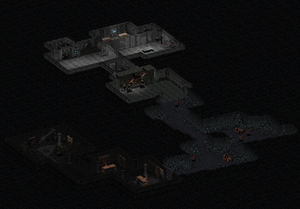 Located in the basement of the Cathedral, which requires a black badge to access. The entrance to the Vault is hidden behind a fake bookcase. The bookcase in the southeastern corner can be used to activate the door with Lockpick, Traps, or just waiting until Jeremiah opens the door (if the player has followers or isn't disguised as a Cathedral member, he will kick them out; useful to teleport outside the cathedral).

The access cavern contains several floaters and centaurs, with Mariposa mutants standing watch over the entrance. For details, see the relevant article.

I almost regret not doing more with the Cathedral, but I did my best not to throw in side quests because I thought at that time the player would be pretty much streaking for the endgame and any quests at this point would be more annoying than useful. There's a time for speed bumps, and there's a time when you have to let them cut loose. So the Cathedral's mostly for color. I tried to come up with a few NPCs there who weren't despicable; I thought it'd be more interesting if the cult attracted a few people who weren't stupid and thuggishly evil. That way, they'd contrast better with people like Morpheus (whose dialogue was written before I came on the project) who *was* an opportunistic scumball.