Put simply, it's a co-opted mining rig that's been changed into an armored vehicle -- bigger and tougher than any tank we have in our arsenal. The Chinese fitted the vehicle with multiple weapons, reinforced the armor and outfitted them for long range.

The Chimera is a heavily modified Alaskan mining rig that was upgraded by the People's Liberation Army to serve as a battle tank in the harsh conditions of the Alaskan theatre of war. It appears in the Fallout 3 add-on Operation: Anchorage.

Modified mining rigs of this type feature in the Anchorage Reclamation simulation, created by Virtual Strategic Solutions, Inc. under the direction of General Constantine Chase. It is not clear whether the Chimeras were actually developed by the Chinese, as voice clips intended for use in the game suggest their presence was a fantasy implemented by General Chase.[1] 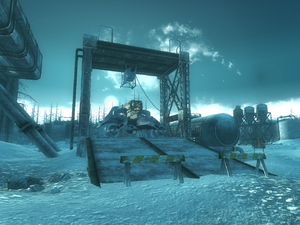 A Chimera undergoing conversion at the depot.

The Chimera itself was originally a screw-propelled vehicle intended to negotiate harsh Alaskan terrain. The chassis rests on the screw, with each powered by a separate motor with plenty of clearance between them. A streamlined hull is mounted to the chassis, with a deployable mining rig resting in the middle of the vehicle. The low profile and organic shape make it easy for the Chimera to transverse the tundra in search of oil fields.[2]

The Chinese converted these mining rigs into machines of war, reinforcing the armor and gearing it up with a directed energy weapon for long range engagements.[3] The cannon is jury rigged to the drilling tower, giving it a wide firing zone, though the imperfect mounting limits its ability to rotate. Any assailant attacking from the rear will be able to fire at it with impunity.

The civilian heritage of the rig is evident when they are engaged. In stark contrast with military vehicles, Chimeras are vulnerable to sustained small arms fire from infantry units, especially when the energy cannon, radar antenna, or the screws are hit. Another disadvantage is that the Chimera is fully automated. The lack of a shielding and a human pilot renders its unsophisticated combat intelligence vulnerable to human ingenuity and electromagnetic weaponry.

Chimera tanks are durable, comparable to a sentry bot or deathclaws. Their long range weapons are a significant threat, though their large, imposing size makes it easier to hit them, especially though indirect fire with frag grenades. Close combat is hazardous, as the Chimera will knock the player down if they come too close.

As Chimeras are fully automated, they can be disabled with the Robotics Expert perk.

The Chimera tank appears only in the Fallout 3 add-on Operation: Anchorage.