From The Vault - Fallout Wiki
(Redirected from China)
Jump to: navigation, search
...

We were winning, too. And then those damn Reds launched everything they had. We barely got our birds up.

People's Republic of China (China for short) was a pre-War communist state in eastern Asia. Although severely affected by the economic crisis and the Resource Wars, China was able to compete with the United States for control of the last remaining resources on Earth and wage an eleven year long war to conquer Alaska and later defend its homeland. Together with the United States and the rest of the world, China ceased to exist in 2077, as the nuclear holocaust swept the globe and destroyed human civilization. There are no reliable sources that would verify the fate of survivors in Chinese territories.[1]

China survives in the United States of all places. The Shi of San Francisco are descendants of the crew of a Chinese submarine that beached in the ruined city, and are one of the most advanced organizations in the wasteland.[2] On the opposite coast is the Chinese Remnant, the remains of the Chinese intelligence network in the United States, ghoulified and eking out an existence in a fortified safehouse within the ruins of Washington, D.C..[3]

Artifacts of the Chinese infiltration are also commonly encountered in areas with a heavy infiltrator presence and as war trophies brought home by US servicemen; these include the People's Republic of America Radio, Type 93 Chinese assault rifles, Shanxi Type 17 Chinese pistol, and imperial officer jians.[4]

Main article: Pre-Divergence history of the People's Republic of China

However, hostilities would not escalate until a century later, as the global energy and resource crisis grew more and more severe. Heavily reliant on fossil fuels, the People's Republic of China was hit particularly hard. In 2060, the Middle East oil fields ran dry, triggering the collapse of the European Commonwealth and the Middle East oil powers.[6] Traffic on the streets worldwide ground to a halt as fuel became too precious to waste on automobiles. Alternatives were explored, with limited success.[7] Two years later, Chinese operatives would be found across Canada and the United States, running interference and gathering intel that could be used to balance the scales.[8] To counter communist interference, the Third Red Scare was manufactured. As the situation across the United States worsened, both as a result of the deteriorating economy and the New Plague continuing to wreak havoc despite quarantine measures,[9] the federal government used the increasing national paranoia to try and control the situation, by discouraging assemblies, fueling anti-communist sentiment, and encouraging reporting subversive elements.[10] The Vigilant Citizen's Hotline was even established to allowed hysterical citizens to report neighbors to the government for any behavior that could be construed as in support of communism.[11]

To stave off collapse on the domestic front, China launched campaigns to annex neighboring countries and provide resources for the starved economy.[12] While successful, the strategy was only a temporary solution to a much larger problem: Dependency on fossil fuels. The People's Republic found itself on the border of collapse in spring of 2066. Trade talks with the United States revealed it to be unwilling to export its own reserves of crude oil. Aggressive negotiations resulted in the talks breaking down completely.[13] On July 24, the U.S. president declared that the last known supply of petroleum will be used exclusively by the U.S. and that America will not sell or trade any oil to foreign parties.[14] As if to insult the communist state further, the United States government revealed the first cold fusion power cell to the public.[15][16]

The situation was dire. Although China was able to tap a large deep-sea deposit of oil below the Pacific, it was unable to make use of it due to sabotage. American interference was suspected.[17] Pushed up against a wall, Chairman Cheng decided on an ambitious and extremely dangerous plan: Invasion of Alaska and seizure of its natural resources by force. Chinese troops swarmed the state, with the primary push focusing on the city of Anchorage, necessary to maintain a link with the Chinese mainland. The Anchorage Front Line became a true battleground.[18][14][19]

The invasion inadvertently triggered the gradual annexation of Canada, as the United States forced it to grant right of passage to American military forces.[20] The deployment of the T-45 power armor helped prevent Chinese tanks and infantry from overrunning Alaska. The situation rapidly deteriorated into trench warfare as neither side was capable of breaking the stalemate and forcing peace terms on the enemy and the resource shortage precluded large offensive operations by Chinese motorized forces.[21]

The conflict raged for years, leading both sides to exploit all available resources to prop up their operations. The United States focused its attention on Canada, liberally exploiting its natural resources while ignoring protests made by Ottawan citizens.[22] Riots and protests eventually culminated in a sabotage attempt on an oil pipeline in 2072. The United States military used the incident as pretext to invade Canada outright and begin annexation.[18][23] Meanwhile, China attempted to destroy American resistance with aggressive use of biological weapons, leading the U.S. government to commission West-Tek with the development of a universal cure on September 15, 2073.[24]

Despite claims of fighting a defensive war, American infantry and mechanized divisions launched an invasion of the Chinese mainland in 2074. However, with its economy stretched to the breaking point by the war on three fronts, the U.S. was unable to overcome its foe. American units were bogged down on the Chinese mainland, putting a further drain on American resources and supply lines.[25] By 2076, the war had raged for a decade with no end in sight. Both China and the United States teetered on the brink of collapse at this point. However, the U.S. gained an advantage to offset the problems and the introduction of the T-51 power armor in June helped to tip the scales in favor of the U.S. military. The next generation of power armor resolved problems existing in older generations of armor. Mechanized cavalry units outfitted with the T-51bs were sent to the Alaskan and Chinese fronts, carving a swath through Communist forces. The Chinese economy crumbled under the onslaught as supply lines from nations annexed by the Beijing regime started falling apart.[12] The American regime did not fare any better. In August, food and energy riots start in urban centers across the United States. A state of emergency and martial law was eventually declared, with U.S. military forces being deployed on the domestic front to fight their own countrymen. The United States became, effectively, a military junta.[26]

2077 brought even worse news for the Chinese communists. The Anchorage Reclamation ended with a decisive American victory on January 10, with Anchorage back under U.S. control and Chinese forces retreating across the front.[27][28][29]

China was backed into a corner, as the United States could allocate its military resources to destroying resistance in mainland China. With the loss of Alaska, the disintegration of its supply lines, and a renewed American offensive on the Chinese front, spearheaded by the newest T-51b powered armor units, China could not defend itself.[17] As if expecting immediate retaliation, the American oligarchy retreated to their shelters, abandoning the nation.[30] Bases across the United States were sealed and troops redeployed to feed more men into the meat grinder that the Chinese front became and sustain the American offensive.[31]

Nuclear weapons were launched on October 23, 2077. Vaults are sealed as the air raid sirens blare for the last time. Within two hours, both the United States and China ceased to exist as nations, their cities vaporized in nuclear fireballs.[32]

Chinese society was built on the principles of Maoism, a form of communism derived by Mao Zedong from Marxist-Leninist doctrine, but it is unknown how much of the doctrine survived to 2077.[33]

The shortages caused by the resource crisis and ongoing war with the United States resulted in strict rationing being instituted, with lotteries being used in particularly difficult situations to issue rations to Chinese citizens without prejudice. In practice, these were routinely manipulated by the government to reward faithful service.[34]

China was a single-party communist state, ruled by the Chinese Communist Party.[35] The head of state is the Chairman (equivalent to the United States' President), with the last leader to hold this office being Chairman Cheng.[36]

As any sovereign state, China routinely maintained embassies in foreign nations. Xiu-Ling was the last ambassador to the United States.[37] 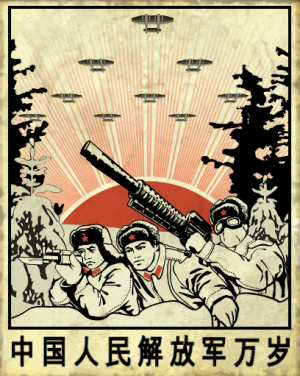 The People's Liberation Army relied on its vast reserves of manpower and industrial capacity to maintain its edge, though unlike the United States, focus was put on firepower rather than personal protection. Chinese soldiers were issued jumpsuits rather than hard combat armor, though the Type 93 assault rifles that were the workhorse of the army were significantly more powerful than standard American R91s. Key to the Chinese doctrine were tanks, used to support infantry operations during the invasion of Alaska. However, when they were countered by early power armor Americans deployed, China realized that it had no analogue and rushed to create its own versions.[21]

While unsuccessful at creating a powered armor suit of their own, Chinese researches managed to create practical active camouflage technology, commonly referred to as stealth technology. Thanks to an excellent intelligence apparatus that outclassed its U.S. counterparts, China managed to conceal its large scale research operations from American operatives for years. The development of Hei Gui stealth suits allowed for easy penetration of enemy lines and hamstringing American offensive operations where possible. While some units were captured and reverse-engineered, China's efforts continued apace and by 2075 was rumored to possess an entire fleet of stealth submarines - the Ghost Fleet. Operating out of the Shaanxi province, the fleet was the crowning achievement of their macro scale research effort.[38] As such, stealth suit equipped Crimson Dragoon units stabilized the frontline, while the stealth submarines ensured that China would retain nuclear capability even in the case of a total frontline collapse.[39][40][41] Other methods used included the deployment of pulse fields, capable of literally frying power armor operators alive in their suits.[42]

Beyond stealth, the Chinese had an extremely effective intelligence and security apparatus. Apart from concealing its stealth research, Chinese operatives infiltrated mainland United States and set up an extensive covert network of spies and intelligence operatives. The largest of their spy networks was located in and around Washington D.C., coordinated by a mobile command center, with strongholds throughout the region. China even managed to set up regular patrols by Chinese submarines, such as the SSN-37-1A. Chinese saboteurs even attempted to sabotage the Hoover Dam in Nevada.[43][44]

Interestingly, China appears to have been the first to develop wave/field laser technology, later stolen by American spies and repurposed for the Liberty Prime and Tesla cannon projects.[45] It has also implemented its own human enhancement programs, which inspired American scientists, but failed to achieve success comparable to U.S. scientists.[46]

The economy of the People's Republic relied heavily on fossil fuels, which also provided the impetus for the invasion of Alaska, as it teetered on the brink of collapse due to the resource crisis.[13]

The nuclear Armageddon in the back-story was between the US and China. After shipping several people asked me why China and not the old standby, the Soviet Union. I made the choice when I remembered experiences with Oleg, a Moscow developer I worked with months before when I was assistant-producing a typing game. Once, in the middle of a phone conversation, I heard some muffled bangs, and the phone went quiet. When I asked him what the noise was, he replied, "Oh, it was just the Russian mob firing their guns in the street." I thought he was joking – he wasn’t. After that, I had a really hard time believing that the once mighty USSR would be in a position to threaten the world any time soon. So I turned to the next major communist country that typifies "the East": China.[47]

China is mentioned in some form in all Fallout games.