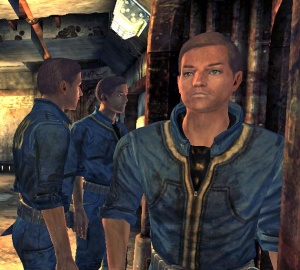 In Big MT, the GS-2000 Biological Research Station was used to clone plants for research purposes. Not much is known on the process of how cloning was done, but Big MT's research efforts in botanical cloning also created salient green, a molecular paste that when heated can be used to create any plant the user needs.

Therapeutic cloning involves cloning cells from a human for use in medicine and transplants. Such procedures are routinely done in Vault City.[1][2]

Reproductive cloning involves making an entire cloned human, such is the case in Vault 108, wherein a grand cloning experiment was undertaken by the vault dwellers. The scientists there created a series of 54 clones, but imperfections in the process resulted in the copies becoming progressively more insane and violent. When the observation rooms filled up, the scientists in charge decided to dispose of the clones, which promptly turned on their makers, wiping out the population and forcing the survivors out. The list of victims included Doctor Peterson, one of the first doctors to be injured by a violent clone.[3][4]

The clones were left to fend for themselves in the Vault, with the sole exception of Gary 23, who was abducted by Defender Morrill for the Outcasts' excavation efforts at the Virtual Strategic Solutions, Inc. facility.[5]

Cloning was pervasive in pre-War American culture. So much so that, not only the observant of Vault City know that they do not want to be like one,[6] but also the under educated of New Reno know what one is.[7][8]