From The Vault - Fallout Wiki
(Redirected from Colusa)
Jump to: navigation, search

Internal sabotage took down the oil rig - never did get the full story. The NCR took out Navarro, saying we posed a threat to the region.

Navarro (also known as Navarro Refinery[1] and Camp Navarro[2]) is a pre-War installation, where a Poseidon Oil refinery and an Enclave military base are located, located north of San Francisco along the coastline. By 2281, Navarro is a part of the New California Republic. Navarro can be found fifteen squares south of Arroyo.

Before the War, Navarro served as a Poseidon Oil refinery.[3] Adjacent to the oil installations, a government-funded military base was constructed, together with a satellite up-link station and maintenance and repair facilities. Over a century after the Great War, the base was commandeered by the Enclave, who converted it into their primary mainland outpost, establishing a location for refueling and maintaining their Vertibirds. Due to the limited range of the Vertibird,[4] as well as frequent malfunctions, especially in post-War conditions, Vertibird schematics were almost always present on site for necessary repairs and maintenance, but were prone to misplacement.[5] By 2242, Navarro was still a relatively new base, without a full compliment of staff.[6] Replacements were transferred to the base from other, smaller installations on the mainland.[7][8]

While the Enclave used Navarro, it played host to a number of important figures, including two prominent Enclave scientists, Dr. Henry and Dr. Schreber. They worked together, but had radically different theories about the mutations in the wastelander population and methods of curing them. Their disagreements had dire consequences: when Henry was arguing with Schreber about the mutation problem for the five billionth time, the latter told Henry in a fit of anger that he was going to recommend Henry's transfer to another Enclave facility and reassignment to cybernetic maintenance. Henry took the threat seriously and within hours, he stole a cybernetic dog and slipped away from the Navarro facility. The Enclave, although not pleased with the doctor's attitude and avenues of research, were unhappy with his desertion (they need all the scientists they can get), which resulted in several soldiers from Navarro being punished for negligence.[9] Henry wasn't the only deserter: Navarro's location on the mainland made it possible for others to abandon the Enclave (for example, A. Ron Meyers).[10] The fact that soldiers were issued leave to San Francisco couldn't help the situation.[11]

In 2242, the Chosen One infiltrated the base, disguised as new recruit. He was sloppy: Sgt. Arch Dornan caught him, but assumed that they were an actual new transfer and delivered one of the greatest and inspiring verbal smackdowns in recorded history.[12] His mission is otherwise successful: he killed Dr Schreber, freed Xarn,[9] liberated K-9 (taking him to Shady Sands)[9] and, most importantly, retrieved the Tanker FOB[13] and used it to activate the tanker to travel to the oil rig. After the destruction of the oil rig, Autumn Senior was contacted by John Henry Eden, who ordered the majority of the Enclave forces to relocate eastwards, to the Capital Wasteland.[14] Navarro remained as a fully staffed Enclave base, including one of its premiere infantry squads, the Devil's Brigade.

A couple of years after 2246,[15] the New California Republic Sacked Navarro, stating that it posed a threat to the region.[16][17] The NCR Army was victorious and the Enclave Remnants scattered to the winds.[18] Advanced technology was recovered from the base, including Vertibirds in operational condition and a mysterious package bearing markings similar to those found in the Divide. The NCR hired a Courier to take the item from Navarro to the Divide, inadvertently bringing about a catastrophe.[19] The loss of Navarro was likely not known to the Enclave forces on the East Coast as the creator of a Duraframe eyebot prototype refers to "Navarro scientists" in his audio logs, under the assumption that they will continue his development of the duraframe eyebots.[20] Furthermore, the eyebot carried on from the Divide and continued traveling to where it thought Navarro was, vanishing and leaving its fate and the current state of Navarro unknown.[21]

Navarro is divided into three districts. 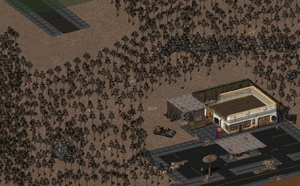 The station acts as a checkpoint for the Enclave's military base - the sentry's role is to turn away any undesirables and receive replacement recruits from other mainland bases. He is supposed to clear them and direct through the minefield in the forest next to the station. 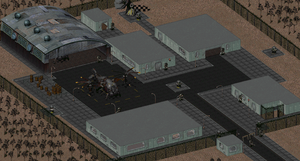 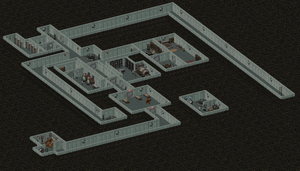 The underground areas of the base contain the base's armory, mainframe, commander's office and the soundproofed science lab, operated by Dr. Schreber, participating in the deathclaw intelligence enhancement project.[22][23]

A working name for "Navarro" was "Colusa".[25] According to one of the lead designers:

I remember that once we put all of the locations on the world map that we moved some of them around a bit to create a more even spacing of adventure locations. I don't remember if we moved the Enclave's mainland base for this reason, but it's possible.

The real Navarro is located in California, south-east of the towns of Fort Bragg, Little River (which has an airfield near the coast), and Albion Ridge. In the Valley of Anderson, west of Booneville. There is a small gas station, Navarro General Store, which may be what the gas station in Fallout 2 is based on.