Combat armor is a general term for any suit of personal body armor employed before the Great War by the United States Armed Forces. Although offering varying degrees of protection, sophistication, and encumbrance, the combat armor is typically among the finest possible options when it comes to personal protection, as it was designed to secure the operator without limiting their protection or fine motor control.[1]

Modelled after the human silhouette and designed to provide balanced protection that does not limit mobility on the battlefield, combat armors are a diverse family of personal body armor of varying degrees of sophistication, from the earliest iterations of the armor developed by the United States Army[2] to the cutting-edge riot gears that came into use prior to the Great War.[3] 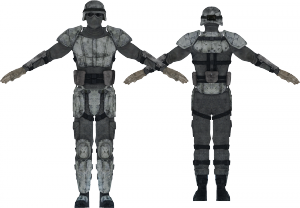 A full suit of Army combat armor used on the Alaskan front.

The first modern type of combat armor developed by the United States Army[2] to the cutting-edge riot gears that came into use prior to the Great War.[4] consisted of individual armored plates manufactured from synthetic fibers[5] attached to standard load-carrying equipment of the infantryman. The individual components included a combat helmet issued with matching goggles in hazardous environs, front and back ballistic plates, and a pair of axillary protectors. Additional forearm protectors were issued to frontline troops.[6] The lower body was protected by a pair of thigh plates, worn together with a groin and kidney protector. The shins, knees, and feet were covered by frontal plates worn over standard combat boots.[7]

The armor was typically worn in conjunction with standard Army fatigues[8] or specialized uniforms designed for it, with various solid color camouflage patterns (including Arctic white, coyote brown, and olive drab). Rank indicators were typically painted on the axillary protectors,[9] with the Army insignia and identification numbers printed on the back plate.[10][7]

The success of the Army combat armor paved the way for superior models. The most important of these was the general purpose combat armor issued to military units nationwide,[11] with the first Army model relegated to domestic and garrison duties.[2]

The new combat armor was manufactured in three different variants, for wearing with the standard armed services uniform: Light, medium (sturdy), and heavy. The modular suit of armor was manufactured from alloys that offer balanced protection from conventional firearms and energy weapons[12] and provide load-bearing functionality in combat. A new combat helmet model was designed for all three variants, incorporating ear protection and a pair of attachment points for additional equipment, such as lamps (commonly found on surviving units) and targeting or imaging equipment.[13]

The basic, light model was most common, issued widely to troops on the battlefield.[14][11], it consisted of a pair of plates covering the chest and upper back, attached to standard load-bearing equipment, axillary protectors, and a pair of plates covering the thighs.[15] The superior, sturdy combat armor variant was the baseline model. The torso assembly is enhanced with the inclusion of soft body armor from ballistic fiber, overlaid with enlarged hard armor plates providing superior coverage and protection. A groin protector is included by default. Limbs incorporate the axillary and thigh protectors of the lighter model, with the addition of plating on forearms, knees, and lower legs. The entire assembly was intended for units engaged in heavy fighting on the most contested fronts.[16]

The heaviest model of combat armor is a radical departure from the principle of balance that guided the design of combat armor. Emphasizing durability and protection, the heavy variant encloses the entire body in a layer of soft body armor enclosing it almost entirely, with the characteristic armored plates worn on top. The torso assembly incorporates the medium variant upgraded with armor plating enclosing the entire torso, including a characteristic hump that protects the upper back. Arms are sheathed in segmented armor that incorporates additional protection for hands, elbows, and shoulders (heavy axillary protectors include a pair of characteristic pauldrons). Legs are protected even more heavily, with armor plating enclosing the thighs, lower legs, and covering feet.[17]

After the Great War, some factions developed their own modifications. For example, the Brotherhood of Steel armors incorporate a special coating that provides additional protection from background radiation.[18]

Even with the widespread deployment of standard combat armor, work continued on more advanced suits of combat armor. The largest and most successful model was a high-tech armor using advanced defensive polymers to provide a high degree of protection,[19][20] also referred to as battle armor[21] and reinforced combat armor.[22] The advanced model represented a new approach to design, doing away with the modular construction of its predecessors, and was hailed as an advanced personal armor for the 22nd century police officer or soldier: Highly effective against most types of damage and lightweight, unlike the heavy variant of the standard combat armor. Unlike older models, materials used in the advanced combat armor also provided limited protection from radiation by default[23][24] and typically incorporated some form of camouflage by default.[25]

The basic component of this advanced armor is a long-sleeve jumpsuit, incorporating thermal dissipators and general purpose dissipative membranes.[26] It is worn underneath the actual combat armor, manufactured from polymer impact plates providing concussive protection and incorporating additional dissipation cells and membranes.[27] [28] The top layer incorporates a single-piece vest enclosing the entire torso, a pair of axillary protectors, armored boots, forearm protectors, and a ballistic helmet with an integrated laser targeting system and a polarized visor. Compared to its older brother, the design is a lot more mobile, with limbs protected by soft armor that doesn't limit fine motor control and agility, and crucial areas of the body hidden under hard armor. The organic, rounded shapes of the armored shell also improve its protective qualities as compared to more angular past models.[29]

Although the advanced combat armor was never fielded in large enough quantities to supplant the standard combat armor, additional variants were created. The combat armor mark II is a heavier set designed for use by shock troops and Special Forces, incorporating additional armor plating and increasing its protective qualities. After the Great War, the Brotherhood of Steel created its own variant that incorporates superior materials and design. Easily recognizable due to polished rivets incorporated into its pauldrons and the blue trim on the edges.[30] 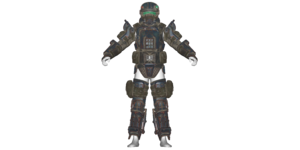 An advanced model of combat armor designed for the United States Marine Corps,[31] the Marine armor pulls no stops when it comes to providing protection for the user, above even that of the heavy combat armor. Outclassed only by Power Armor, every piece of was designed to provide exceptional protection in nearly every battlefield scenario.[32]

Unlike the standard or polymer combat armor, this variant relies on a combination of hard and soft armor to provide protection. The torso assembly consists of a tactical vest from ballistic fiber covering the entire torso from the groin to the shoulders and neck, supplemented by tactical rigging combining hard ballistic armor with a powered survival system and a belt with four multipurpose pouches. Arms are protected by sleeves from the same ballistic fiber, combined with hard armor covering the shoulders, forearm, and dorsal side of the hands. The hard armor is shaped to provide additional protection from the front when aiming and double as attachment points for additional carry pouches. The legs are protected in the same way, with the added benefit of thigh pouches and a pair of stabilizers on the shin. The helmet is derived from the standard combat armor variant, combing by default with a polarized visor, filtration mask, and additional carry strap on the back of the head. Together, they combine to provide a heavy duty set of combat armor that covers almost the entire body in heavy armor, excepting necessary articulation points.[33]

Another advanced design fielded in limited quantities before the Great War, riot gear was a specialized model of combat armor used by the United States Marine Corps,[34] Army units in the American West,[35] and select law enforcement agencies, such as the Los Angeles Police Department.[36]

The most characteristic element of this model is the helmet. A rounded shell protects the head from incoming gunfire, while the lamps on the right side of the helmet (including infrared and visible light projectors) provide illumination.[37] The armored mask designed to be worn with the helmet is necessary to use the IR lamp, due to the low-light optics integrated into the lenses.[38][39] The mask also incorporates a locking mechanism to properly join it together with the helmet shell, ear covers with membranes that do not inhibit hearing while maintaining its protective qualities, and air filters. Some upgraded models also include communications gear and upgraded filtering apparatus.[40]

The torso assembly is a flexible vest of rigid impact plates, worn with adjustable straps on the sides and shoulders. One of its most notable additions is a prominent throat protector mounted on the vest, used by military operators to display tactical numbers[41] or the owner's identifying information, such as the name, rank, and blood group, allowing for easy casualty management.[42] Later models of riot gears may include heavier protection, including armored plating on shoulders and forearms. Military coats designed for use with the armor will also typically include some form of bullet-resistant reinforcement.[40]

The United States Armed Forces were the principal operator of the entire family of combat armors before the Great War, although some were provided to law enforcement agencies. It was not available to civilians without a special permit provided by the BADTFL.[24]

Wes Burt (for Massive Black) developed the design. I shared your concerns, so there were a few things I requested to keep it from turning into Jin-Roh Part 53. First, I asked that he wear jeans and boots. I also requested that he should typically have a revolver or lever-action rifle with a bandoleer for bullets. Last, I asked for his jacket to be dark brown, not completely black. I wanted to pull some of the color elements toward warmer "cowboy" tones instead of strict neutrals.

Wes is a really fantastic artist and I think he did a great job.