A staple of pre-War American cuisine, cram is a type of precooked meat, spiced and preserved to last centuries even in the most adverse of conditions. Although the resulting foodstuff struggles to be classified as proper meat,[1] it is an excellent source of protein.[2] Although it's popular with wastelanders, it has a tendency to cause major constipation among those who overindulge in too many of the characteristic blue cans.[3][4] While cram can be consumed straight from the tin, it is also an ingredient in more complex dishes, such as fire ant fricassée.[5]

A standard carton packaging containing a can of cram. 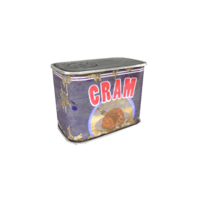 A standard blue-colored can of cram that contains delicious meat.