From The Vault - Fallout Wiki
(Redirected from Crimson Caravans)
Jump to: navigation, search 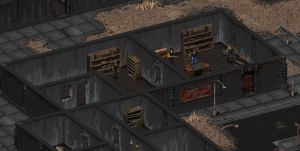 The Crimson Caravan main office in 2161, the Hub.

Established around 2151[5] by Demetre Romara and Keri Lee,[6] the Crimson Caravan Company quickly became one of the largest and most influential caravan houses in New California, with two out of six merchant representatives in the Hub's Council.[7] Their rapid rise to prominence was the result of a company policy characterized by others as crazy: The Crimson Caravan would do any job, no matter the risk. As long as the client paid for their expensive services, Crimson Caravan would lead its heavily armed caravans to hell and back.[8] Demetre considered the danger thrilling and exciting. Apparently, you can only feel alive with bullets flying everywhere and blowing enemies apart.[9] Yet despite their apparent recklessness, the Crimson Caravan had the lowest caravan loss rate, even when you factor in the Master's Army raids (which only claimed two caravans by 2162).[10]

The Crimson Caravan company stood the test of time and continuously expanded its operations. With the formation of the New California Republic it became one of the key drivers of its economy, establishing new trade routes and broadening its reach.[5] By 2281, pretty much every major settlement within its influence has a Crimson Caravan branch.[4]

The Crimson Caravan was also instrumental in reintroducing the bottle caps following the Brotherhood War and the destruction of the Republic's gold reserves. The resulting rush to withdraw life savings and the NCR's failure to pay back in gold nearly led to an economic collapse, mitigate by the NCR government's abandonment of the gold standard and establishment of fiat currency, not payable in specie. Since then many wastelanders lost faith in it as a medium of worth, both as a result of it not being backed by anything but the government's word and the inevitable inflation. In response to the loss of faith, merchant consortiums of the Hub established their own currency, the veritable bottle cap, backing it with water (exchanging a standardized measure of water for caps).[11][12][13][14] The actual process was very deliberate. Since Hub bridges New California with the Mojave and lands beyond, the merchants conspired to reintroduce the bottle cap as a currency out of frustration stemming from NCR's ineptitude in handling the currency crisis. In the time leading up to the introduction the merchants laid the foundations for bottle caps as a currency, establishing control of or destroying facilities that could fashion new bottle caps and seizing excessively large caches of old bottle caps (smaller ones in private hands were left alone, as their owners would readily embrace the returning bottle cap).[14][15]

The Crimson Caravan Company is a well organized merchant house, working like a well oiled machine. In its early years, it was based out of the Hub, ran entirely by Demetre and Keri, whose eccentric ways and enthusiasm for violence pushed it to success (even if he handed out frag grenades as toys to prospective guards).[16] It helped that Demetre didn't care about who worked for the company, as long as they protected the caravans.[17] Although the company had the least frequent departures (on the 3rd and 17th of each month), they covered the most caravan destinations, including the Lost Hills bunker and Necropolis.[18] The standing company policy was to hire experienced guards only.[19] To compensate for the danger encountered on the way, the guards were paid 600 bottle caps per course, for a total of 1200 caps for a round trip.[20]

The rise of the NCR offered new possibilities for the company, ones it vigorously pursued. Its efforts to expand its economic influence also helped the Republic develop.[5] Crimson Caravan modified its operations, with Hub serving as headquarters and local company branches opening in major markets: Pretty much all larger towns in California and the Mojave.[21][4] The new structure also allowed the company to attract wealthy investors who would provide the capital necessary to expand their operations. One such major investor was the Jamison family of Redding. An unexpected side effect was that the family could pressure the head executive into posting a family member, Henry Jamison, to the position of branch manager in New Vegas. By 2281, the branch was effectively driven to the ground as the manager was less interested in company affairs and more in the affairs of casinos. More specifically, gambling and prostitutes.[22]

The underperforming nature of the New Vegas branch exemplifies an interesting element of the company's structure. If a branch fails to perform, the head executive (Alice McLafferty in this case) can take over operations to straighten out the business.[23]

Another feature of the organization is its use of work contracts, a result of the re-emergence of wage labor in the preceding decades. Employees of the Crimson Caravan Company are hired for a specific duration, during which they are provided with food, water, living quarters, and other amenities in exchange for their labor. Their wages are withheld until their contract ends.[24] The employees are informed in advance of the contract's nature,[25] including the fact that leaving before the contract ends will result in forfeiture of wages.[26] On the bright side, the company always pays up.[27] However, non-compete clauses tend to be pretty rigid and even after an employee completes his stint with the company, they might prevent them from finding employment elsewhere.[28]

As a major caravan house, Crimson Caravan finds itself in natural competition with other trading ventures, such as the Far Go Traders and the Water Merchants in 2161. The companies sabotage and undermine each other constantly, but keep it low key and rarely attack each other outright.[29]

The expansion and development of the NCR and the Crimson Caravan Company yielded a contract between the two, in which the Crimson Caravan supplies the most military grade weaponry and many other pieces of equipment.[30] However, this lucrative partnership also resulted in the caravan's list of competitors becoming considerably larger. By 2281, it included the largest ordnance manufacturing syndicate in the wastleands, the Gun Runners, the Mormon traders of New Canaan controlling the northern trade routes,[31] and Mojave trading outfits such as Cassidy Caravans. Their old time rivals, such as the Far Go Traders, also continue to compete. The lucrative NCR armor manufacturing contracts are but one example.[32]

The tradition of sabotage and undermining competitors in order to dominate the market was upheld by the Crimson Caravan's head executive, Alice McLafferty. In the Mojave, it included sealing an agreement with the Van Graffs to undercut and/or exterminate competitors,[33] industrial espionage,[34] and simply buying out the competition.[35][36]

The Crimson Caravan are also attempting to establish a branch in New Canaan and run other regional caravans out of business.[37] As the taxes would bring the Crimson Caravan a disadvantage compared to the New Canaan caravans, they might overwhelm them with a flood of cheap NCR goods as a long-term solution. For this, Alice McLafferty would have to call in some favors with her contacts back in California, but the potential profit margins are apparently worth it.[38]

The Vault Dweller can talk to Demetre Romara and Keri Lee about working as a guard. Their travel destinations include Junktown, Boneyard, Necropolis and Brotherhood of Steel. The pay is $600 per run and they operate on the 3rd and 17th of every month.

Crimson Caravan features in several quests, including You Can Depend on Me and Pressing Matters) offered by Alice McLafferty, Young Hearts by Jack, and of course, Heartache by the Number for Rose of Sharon Cassidy.

The Crimson Caravan Company focuses on reliable, rugged technologies in their activities. Its primary advantages are its industrial and agricultural capabilities, allowing the company to manufacture goods cheaply in large quantities and cultivate crops and livestock for sale and use. The venerable brahmin are the most important asset, as they act as beasts of burden capable of carrying large amounts of goods large distances. Whether they are pulling carts made from trucks or carrying packs on their backs, the brahmin were the key to the company's success ever since its foundation in 2151.[39][40]

Personal protection uses cheap and reliable tools. The typical Crimson Caravaneer wears leather armor and carries rugged, reliable firearms for personal protection. When not out in the field, caravaneers will opt for lighter, more practical outfits, like the aptly named caravaneer outfit.[40]

In dangerous regions, the company will usually break apart its caravans into several smaller bands. The loss of efficiency is offset by the lower losses should a caravan get hit.[41]

The Crimson Caravan appears in Fallout and Fallout: New Vegas, was to appear in Black Isle's canceled Fallout 3 and is mentioned in Fallout 2.