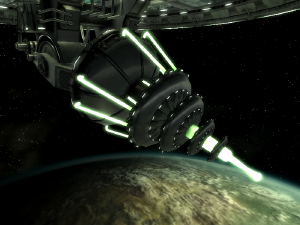 The death ray is a gigantic alien ray gun that is seen to be attached to the underside of Mothership Zeta. The death ray appears to be the mothership's main offensive weapon, and can be used to great effect. The Lone Wanderer gets the chance to use the death ray on an unsuspecting planet Earth, and is later forced to destroy another alien enemy ship with the death ray, after the opposing ship begins to attack the hijacked Mothership Zeta.

The Lone Wanderer first encounters the death ray when they reach the observation area of the ship. A giant alien head will appear as a holographic display, in which it will attempt speech towards the infiltrator. After a while, a loud noise will be heard, and if one looks down, they will be able to see a large beam cross the see-through floor.

Shortly after these events, the quest This Galaxy Ain't Big Enough will begin, and the destruction of the death ray will become the Lone Wanderer's main objective.

Use of the death ray

The options are, respectively, from the right to the left on the console. Use the button in the middle to fire, in which the death ray will take roughly five seconds to charge each time, with its ability to fire being shown through the button lighting up and then spinning.

Mothership Zeta's death ray appears in the Fallout 3 add-on Mothership Zeta, and is used in the quest This Galaxy Ain't Big Enough...