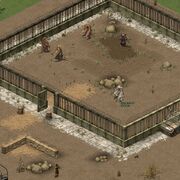 Deathclaw liberation is a special encounter in Fallout Tactics.

In this encounter, you'll find a woman named Janet Badall standing outside a deathclaw enclosure containing five neutral deathclaws. Janet enthusiastically assumes the warrior is, like she, an animal liberationist. After explaining her motives, she unlocks the enclosure gate and runs inside. At this point, the deathclaws become hostile and discover she has very few hitpoints. They then leave the enclosure and proceed to attack anything else on the map such as the Hummer or player characters.

The enclosure gate is trivial to lockpick, not even requiring a single skill point or the use of lock picks. Providing Janet has not been spoken with, the player can mingle freely with the deathclaws, laying remote detonator traps or whatever you like. You can block the doorway with some recruits before speaking with Janet; this will cause her to hurry frantically around the gate, trying to find a way in. You can let her in when you're ready by unblocking the gate. Shut the gate with her inside and soon the deathclaws will form a little huddle against the fence, trying to attack you. They make fine target practice for the Avenger minigun, rocket launcher, etc. just like shooting fish in a barrel. You can open the gate and search all the bodies if you feel like it.