Dog City or Dog Town is what is left of Denver, Colorado after the Great War. There is no real civilization present, just a series of salvager camps set up high in the skyscraper ruins, away from the endless pack of feral dogs which roam the streets below.

Denver is a place that is rich in resources, they're just hard to acquire. There's a lot of looting to be done but it's spread over much of the town, other people have claims on parts of it, and vicious dogs are everywhere, so it's not safe.

The salvagers are about twenty New California Republic former prisoners on a special work release program, salvaging stuff for the NCR in exchange for their eventual freedom. The dogs are the now-feral descendants of local pets and specially-bred police dogs. Rats, giant cockroaches, mutant bats, and climbing lizards are common hazards. The salvagers were forced out of their original camp by the dogs and now are struggling to get by in their new, temporary camp. Tensions are high because the dog threat is constant, they've heard nothing from the NCR in quite some time, and basically the only thing for them to eat is dog meat. There's also a rival group of salvagers trying to steal claims, and a mysterious group of military guys here as well. The salvagers live in the partially-constructed buildings of Denver, several stories up and clear of the dogs (who can't climb). 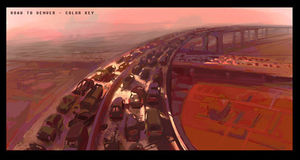 Denver was a wreck. It was in the middle of a building boom shortly before the war, as many new jobs were opening there the city was swollen to bursting. Most of the construction was housing for these immigrants. When the war with China started, resource rationing occurred and suddenly the construction workers didn't have anything to build with and weren't getting paid. Union riots and strikes occurred because the city couldn't pay and the federal government wouldn't step in to help. When Mexico and the Great Midwest Commonwealth started to suffer food shortages, Denver was hit hard because of its high population. Food rationing began. Food riots started because of the rationing, and some buildings were set on fire. The National Guard was called in to contain the rioting, using InstaPens (aka "bullpens") to contain and imprison rioters. Some people deliberately attacked police and National Guard troops so they would be imprisoned and fed. Rioters, National Guard personnel who disobeyed orders, and other military folk who refused to help contain the riots were sent west and east. Then an outbreak of the New Plague hit the city. Rioters burned down large parts of the city in their fear of contamination and anger at their treatment. Many panicked and fled the city by car, clogging the freeways when they ran out of gas and trapping everyone behind them. And then the bombs fell, destroying some of what was left and killing everyone who had managed to live through everything else.

Post-War, Denver has been abandoned by civilized folk, mainly because of lingering radiation (which is gone by now) and huge packs of wild dogs that have taken over the town. Small groups of scavengers have holed up here from time to time or tried to loot some of the buildings but it has never been a concerted effort until now.

In 2251, a bunch of work-release NCR prisoners from Porter's gang have come here to salvage stuff as a way to buy off their sentences. Once there, they were to see about scavenging as many building supplies as possible, establishing a track outpost, and pave the way for the NCR occupation.

In 2253, glowing ghouls started wandering in from Boulder. Some slavers from Caesar's Legion are waiting out the Midwest's seasonal huge radioactive duststorms keeping them from getting home. And there's another gang of salvagers that have moved in and have been raiding claims from the NCR salvagers.

The salvagers have a lot of supplies to trade. If they get the brewery up and running they'll have beer too. They desperately need some variety in their food, and could use some good medical upkeep as well. They'd be happy to trade their stockpiled supplies (or sell claims in the city) for nonperishable food and medical supplies or the services of a medic or doctor. Scavengers also believe that there is gold to be found in the area.

Relationships with other communities

The salvagers are prisoners from the NCR on work-release, and they were treated badly by the administration while in prison, so they're not too friendly to the NCR and thus not likely to befriend the folks at Hoover Dam. They don't care one way or the other about the tribals, though the Hangdogs (or the Blackfoots) would be happy to come here and trade for some dogs (which the salvagers would be happy to do, since to them the dogs are pests at best and dangerous predators at worst). They could strike up a deal with the Brotherhood of Steel as long as they didn't try to claim any tech for themselves. They're used to work and would probably get along fine with the people of New Canaan as long as they were treated well.

Dog Town did not appear in any of the published games, but was to appear in the canceled Fallout 3 project by Black Isle Studios codenamed Van Buren. It is, however, mentioned in Fallout: New Vegas and Lonesome Road.