From The Vault - Fallout Wiki
(Redirected from Derelict vehicles)
Jump to: navigation, search 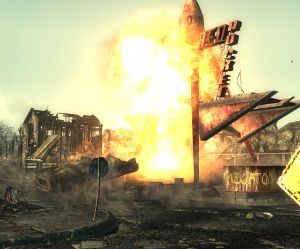 In Fallout 3 there are no drivable vehicles. However, there are some instances where vehicles are used as a means to transport the player to a new locations. In the Broken Steel add-on, the player can visit the interior of the Brotherhood of Steel's unique Vertibird. It is also possible to ride an underground subway train in the Presidential Metro during the main questline. Traveling to Point Lookout is done on a ruined pre-war ferry, "the Duchess Gambit". The player is also required to use a tram cart to enter and exit The Pitt, as the tunnels are too dark and numerous to navigate on foot.

Although there are no drivable vehicles in Fallout 3, there are hundreds of explosive derelict vehicles. After two hundred years of neglect has left their defunct nuclear reactors highly volatile and prone to exploding if damaged. Once a vehicle catches fire, an explosion is inevitable, but more damage will hasten it. The explosion will make an area of approximately 3 meters around the car radioactive for a few seconds.

There are a variety of derelict vehicles dotting the roadways; most are large sedan-sized cars, though there are smaller, one person cars. Heavy semi-truck tractors also can be seen, and take slightly more damage to detonate, but create an explosion identical to other cars. Buses are also encountered, and their explosions are particularly large and devastating, more than twice the size of an explosion created by two cars. Smaller vehicles like motorcycles and street cleaner machines can be shot and blown up, but they do not produce a mushroom cloud explosion, in fact, their "explosion" is extremely small and short, even smaller than a frag grenade/mine explosion. Often, vehicles in close proximity will set each other off in a chain reaction.

There are some derelict vehicles that will not explode no matter how much weapons fire is poured into them. One can discern these from the more dangerous variety by examining the trunk; if the hatch is missing and one can see an empty basin in the back, the reactor is no longer present.