The Desperado is a New Reno casino, and home to the Mordino Family. Focal point for the New Reno drug industry, primarily jet.

The casino itself is lacking the glamour of the outer facade; the interior is dirty, poorly lit, and stinks of booze, jet, and sex. The slot machines probably haven't been oiled in a long time.

The upper level of the casino is broken up into a series of rooms, with Big Jesus' room at the center. Most of the rooms are leased out to the guards. 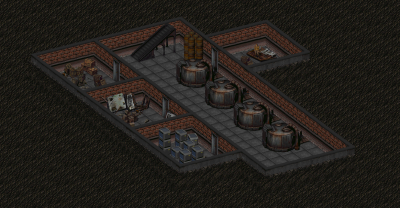 The basement of the Desperado is home to a large boiler, several rats, and a snitch and thief named Pretty Boy Lloyd. There's a room with a bunch of blue crates that also houses an O2 tank filled with a toxic gas. 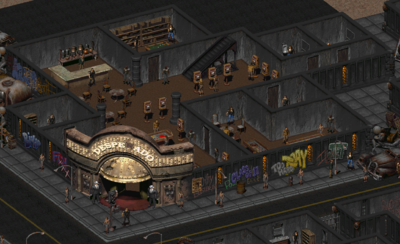 Big Jesus doesn't pay as handsomely as some of the other bosses, but all of his jobs are easy and provide a quick path to becoming a Made Man in Reno.

The design of the exterior entrance to the Desperado is heavily influenced by the real life Golden Nugget hotel and casino in Las Vegas.

The Desperado appears only in Fallout 2.