From The Vault - Fallout Wiki
(Redirected from District of Columbia)
Jump to: navigation, search

Washington, D.C. (formally called the District of Columbia) is the former capital city of the United States of America, established on July 16, 1790, when the Residence Act approved the creation of a capital district located along the Potomac River on the country's east coast. After the devastation brought on by the Great War reduced the city to a sea of irradiated ruins, it and the surrounding area were christened the Capital Wasteland. Even two centuries after the war, it remains a lawless, violent expanse.

An Algonquian-speaking people known as the Nacotchtank inhabited the area around the Anacostia River when the first Europeans arrived in the 17th century. However, the Nacotchtank people had largely relocated from the area by the early 18th century.

On July 9, 1790, Congress passed the Residence Act, which approved the creation of a national capital on the Potomac River. The exact location was to be selected by President George Washington, who signed the bill into law on July 16. Formed from land donated by the states of Maryland and Virginia, the initial shape of the federal district was a square measuring 10 miles (16 km) on each side, totaling 100 square miles (260 square kilometers). Two preexisting settlements were included in the territory: the port of Georgetown, Maryland founded in 1751, and the city of Alexandria, Virginia, founded in 1749. A new "federal city" was then constructed on the north bank of the Potomac, to the east of Georgetown. On September 9, 1791, the three commissioners overseeing the capital's construction named the city in honor of President Washington.

The Organic Act of 1801 officially organized the District of Columbia and placed the federal territory under the exclusive control of Congress. The District was organized into two counties, Washington on the east side of the Potomac River, and Alexandria on the west side. Following this Act, citizens located in the District were no longer considered residents of Maryland or Virginia, thus ending their representation in Congress

Almost immediately after the Organic Act of 1801, Congress took up proposals for the return of the territory to the states, all of which failed. Members of Congress proposed retrocession because they found disenfranchisement of the District's residents to be unacceptable. Other Congressmen were of the opinion that the District could not be immediately returned without the consent of the residents and the legislatures of Maryland and Virginia. Some representatives rejected the idea of retrocession entirely and concluded that the Congress lacked the constitutional authority to return the territory. On July 9th, 1846 the 29th Congress returned Arlington County to Virginia.[1] Congress created a single municipal government for the whole District of Columbia after the American Civil War.

In the early 21st century, when the United States of America was divided into thirteen commonwealths, Washington, D.C. became part of the Columbia Commonwealth, along with Virginia and Maryland. In the years leading to the Great War, the city was fortified against nuclear attacks. But the real threat lurked beneath the radar, as a sizable Chinese infiltrator force was operating within and without the city, as the Sino-American War raged on.

When the Great War came, it reduced most of the city to irradiated ruins, although many of the landmarks survived the devastation.

The Mall is the location encompassing the Washington Monument, Lincoln Memorial, Museum of History, Museum of Technology, the National Archives and the Capitol. The Capitol building and Lincoln Memorial are on the far ends, the Washington Monument near the center, and the Museums are on the sides. The central clearing that encompasses the Mall is carved with trenches, the origins of which is unknown.

In the center of the National Mall stands a massive marble, granite and gneiss monolith that commemorates President George Washington. The Washington Monument now has a large rubble concrete wall surrounding it, and is guarded by a few Brotherhood of Steel soldiers. It also houses the Galaxy News Radio dish at the top of the building. 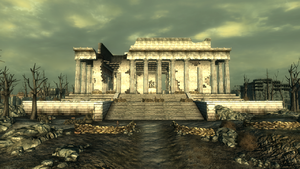 Across from the Washington Monument and its radioactive reflecting pool rests the Lincoln Memorial. Built between 1914 and 1922, the memorial has seen better days: the marble statue of Abraham Lincoln is missing its head, which has since been relocated to the Temple of the Union, and slavers patrol the grounds. The escaped slaves of the Temple of the Union intend to reclaim the memorial as a bastion for all escaped slaves,[2] although the slavers who have already captured the memorial seek to snatch up any slaves that come to them.[3]

The Museum of History appears to have adequately weathered the Great War, save for all of the feral ghouls that have taken up residence in the exhibition halls. Due to the decaying ruins, the entryways to the World War II, Anchorage Reclamation and Resource Wars exhibits are collapsed, leaving only the Abraham Lincoln exhibit partially intact. The museum is also the site of Underworld, a city of ghouls, built into an art exhibit dedicated to life after death in line with the book Paradise Lost.

The Museum of Technology has suffered a similar fate as its historical counterpart. The building dedicated to man's ingenuity and bold thinking has become a dilapidated husk of its former self. Super mutants stalk the halls, disregarding the achievements of yesteryear, like its still functional Vault exhibit, Delta IX rocket exhibit, the Virgo II lunar lander, and the Wright Brothers Flyer.

Between the Washington Monument and the Capitol and to the north is the National Archives. The building that was charged to preserve and document historical and government records is actually quite intact. Most of the archives are kept in a secure underground bunker, so only two centuries of neglect have effected the interior. Super mutants have also established a base of operations within the archives.

An original sketch of the Capitol building.

Atop Capitol Hill rests the Capitol building. The war and years of neglect have severely damaged the walls and central dome, and it certainly does not help that Talon Company, Enclave, and the super mutants are all battling for control of the building.

The Jefferson Memorial was the site of Project Purity in the late 2250s but has since been abandoned. It serves as the focal point of many of the main quests, particularly Take it Back!.

The White House also still exists... sort of. The grounds where the President of the United States lived has been reduced to a gigantic irradiated crater, indicative of a nuclear warhead finding its intended target. Only a small basement layer remains.

In the late 1880s, Senator Francis G. Newlands of Nevada and his partners began the aggressive acquisition of farmland in northwest Washington, D.C. and southern Montgomery County, Maryland, for the purpose of developing a residential streetcar suburb. They founded the Chevy Chase Land Company in 1890, and its eventual holdings are now known as this neighborhood and Chevy Chase, Maryland. It's development from farmland and forest to middle-class housing began in the in the early 1900s, after the construction was completed on the Chevy Chase Line. The initial homes built from Sears and Roebuck catalog kit houses.[4]

By 2077 the neighborhood has been densely urbanized. It was picked as the headquarters of the Galaxy News Network radio company, Galaxy News Radio. Among other landmarks is a prominent primary school, Early Dawn Elementary.

Dupont Circle is also in the northern Washington, D.C. and is a sector of commute street with many entrances to the metro tunnels. Raiders frequent the roundabout.

Vernon Square is in central D.C. and contains the Vault-Tec Headquarters, Statesman Hotel and Our Lady of Hope Hospital. The area is lousy with super mutants.

Takoma Park is a small residential community adjacent to the industrial sector of Washington, D.C. at Takoma Industrial. The neighborhood has many houses, small shops and factories in the northern part of the neighborhood.

One of the original cities that became the District of Columbia, Georgetown is the neighborhood that facilitates transport throughout the city due to its many metro tunnels. This neighborhood boasts a notable presence of super mutants.

Penn. Avenue is the iconic street leading up the White House. While this remains true, the White House has been blow up by nuclear bombardment. Furthermore, the Brotherhood of Steel has set up an encampment on the street and fights off the super mutants that wander the area.

Seward Square is adjacent to Pennsylvania Avenue and the Capitol Building. The Ranger compound that holds Reilly's Rangers is situated here. Additionally, a crazy preacher shouts from the rooftops in the middle of the neighborhood.

L'Enfant is largely populated with super mutants and raiders. The Capitol Post newspaper offices are located in L'Enfant South.

The D.C. Metro is an urban relic from before the war. Once used for public transportation underneath the congested Washington, D.C. streets, the tunnels have been rendered derelict, collapsed and even inaccessible by 2277. After the war, the Metro tunnels became the only reliable way to travel throughout the city's neighborhoods. Although reliable, they are still dangerous, often being occupied by raiders, feral ghouls or super mutants.

The following is concept art by Adam Adamowicz: