From The Vault - Fallout Wiki
(Redirected from Drugs)
Jump to: navigation, search 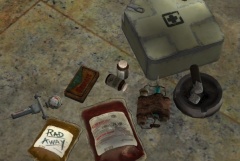 So many chems! Such varieties!

Chem (a truncation of "chemical") is another term for "drug" and is any chemical, medicinal or otherwise, used to effect changes in a person's behavior or biological systems.

Various chems exist in the wasteland, some more beneficial than others. Each chem has an individual profile, allowing players to "stack" chems to provide a larger bonus than either does individually. Chems may have four or five simultaneous effects, usually with some kind of balance – it might lower one stat while raising another. Abusing chems results in addiction. Addiction to a chem will cause withdrawal symptoms when the chem wears off, resulting in lowered stats unless you continue to take the drug, or seek cure.

Chems are divided into two groups: addictive, and non-addictive.

Jet, one of the most popular addictive chems in the Fallout world.

Chems can be found laying about individually or inside containers. They can also be purchased from Wasteland vendors. While nearly every vendor will have at least a few stimpaks for sale, some chems will need to purchased from one of the vendors who specializes in chems.

There are several ways to resist addiction.

In the release of Fallout 3 in Australia, the game was banned for including references to real drugs. A report was released by the OFLC on why it banned the game. The following is a part of report that was released:

"The game contains the option to take a variety of "chems" using a device which is connected to the character's arm. Upon selection of the device a menu selection screen is displayed. Upon this screen is a list of "chems" that the player can take, by means of selection. These "chems" have positive effects and some negative effects (lowering of Intelligence, or the character may become addicted to the "chem"). The positive effects include increase in Strength, stamina, resistance to damage, Agility and hit points.

Corresponding with the list of various "chems" are small visual representation of the drugs, these include syringes, tablets, pill bottles, a crack-type pipe and blister packs. In the Board's view these realistic visual representations of drugs and their delivery method bring the "science-fiction" drugs in line with "real-world" drugs."

One of the reasons for the ban was of the opiate painkiller, morphine being one of the chems that would have been available to use by the player. As a result of the ban Bethesda decided to have morphine renamed to Med-X. Evidence of this last minute change is the fact Med-X's editor ID is still "Morphine" and Med-X addiction's editor ID is "WithdrawalMorphine".