A Mister Gutsy destroyed by EMP generated by a pulse grenade, an example of weaponized EMP.
...

An electromagnetic pulse (EMP) is a short burst of electromagnetic energy capable of disabling or damaging electrical and electronic equipment. This property led to its weaponization by the military, from man-portable weapons to the mighty nuclear weapons. Of course, EMP can also be generated by natural causes, such as a lightning strike, which can also damage non-electrical and non-electronic components.

The principal mechanics behind the interaction between electricity (and, by extension, electronics) date back to the 19th century, though the first practical implementation came in the form of the first nuclear weapon, developed during the Trinity project. The scientists working on the Manhattan Project were well aware of the potential the EMP effect could have and special shielding was used to protect electronics and electrical cables.

The Trinity test began the development of EMP weapons. The understanding of the effect and its practical application developed over the decades as nuclear weapons technology developed. However, it truly hit its stride in the 21st century, with the introduction of military combat robots, such as the Robobrain, Sentry bots, or Mister Gutsy types of artificial constructs.

The United States was one of the industry leaders, and developed practical EMP weapons of its own, so that it would retain the ability to counter oppositional robotics. Though the Navy were involved with a significant project at Sugar Grove involving the technology,[1] others tried their hand at harnessing it. These attempts ranged from the small pulse grenades, through dedicated EMP guns, to hybrid energy pulse weapons and force field disrupting modules. Not satisfied at creating only ranged EMP weapons, the manufacturer of the pneumatic power fist created a line of prototype EMP power fists. Even after the Great War, EMP weapons are extremely useful and popular with wasteland denizens, due to their ability to make short work of any robot or enemy in power armor that endangers them.

Although fundamentally similar, the effects of EMP weapons are divided into two basic categories, depending on the scale of the weapon: Nuclear EMP and non-nuclear EMP. 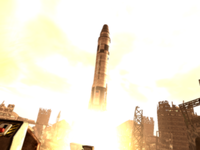 An intercontinental ballistic missile seen when launched. These weapons are capable of causing widespread destruction through the combination of their destructive capabilities and the three stage EMP they generate.

Apart from the devastating thermal radiation and overpressure effects generated by a detonating nuclear weapon, electromagnetic radiation is one of the potentially most destructive elements of such an attack. A nuclear electromagnetic pulse (NEMP) is a complex of three separate pulses: E1, E2, and E3.

The E1 pulse is the first, very fast component. It is a very brief but intense electromagnetic field that induces very high voltages in electrical conductors. This sudden voltage spike is too powerful and too fast for most surge protectors to handle and is fully capable of destroying electronic and electrical equipment. The heat generated by the voltage may cause fire and explosive damage. Even if the pulse is withstood by the equipment, the spike can be amplified if the conductor acts as an antenna (like, for example, unshielded power transmission lines), causing damage from another source.

The E2 pulse is generated by scattered gamma rays and inelastic gammas produced by neutrons, which lasts from about 1 microsecond to 1 second after the explosion. It is quite similar to lightning strikes and less damaging than the E1 pulse. However, as it occurs a fraction of a second after E1, it has the potential to further damage or destroy equipment weakened or damaged by the E1 pulse.

The E3 pulse is much different. Is is a very slow pulse, lasting tens to hundreds of second, caused by the temporary distortion of the Earth's magnetic field. It is fundamentally similar to geomagnetic storms caused by solar flares and can induce currents in long electrical conductors, such as power lines, leading to damage and destruction of electrical infrastructure. 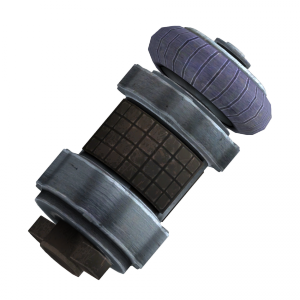 A non-nuclear EMP (NNEMP) is not comparable to a NEMP in terms of range or area of effect. However, it allows for much finer target selection and control over its effects. The NNEMP focuses on the equivalent of the E1 pulse: Creating a small, very brief, and very intense electromagnetic field that that induces very high voltages in electrical conductors. The EMP is typically capable of destroying electronic and electrical equipment through this effect. Even military robots with dedicated shielding can succumb to EMP weapons that are powerful enough.

A variety of methods exist for the generation of NNEMP. The most widespread are various explosively pumped flux compression generators, otherwise known as pulse grenades and mines. These use chemical explosives and are capable of creating very powerful pulses. The downside is that each is a one-shot device.

Electromagnetic pulse is not an all-destructive force, however. It is entirely possible to protect electronics against damage caused by EMP with the proper precautions. Living beings, such as humans, are usually unaffected by EMP weapons, save for a small tingling sensation. However, electronic implants may malfunction when exposed to electromagnetic pulses.

EMP shielding can take on a variety of forms, but its effectiveness relies greatly on the type of EMP being protected against. The prevalence of vacuum tube and other analog technology throughout the world[2] naturally increases the resistance of any electronics to EMP, as these types of devices are much more resistant to electromagnetic fields. For added protection, even grounded metal shielding can effectively dissipate the voltage generated by an EMP and render it harmless.

The ideal form of shielding is a Faraday cage, which effectively isolates its contents from the currents generated by the EMP. The clunky metal cases that dominated 21st century computer design are, in fact, impromptu cages of this type, and are a contributing factor to the relative high survival rate among them.

However, EMP shielding is not always practical. The complex designs of combat robots and power armor, with plenty of moving parts, preclude the application of a Faraday cage. While measures can be taken to reduce the damage an EMP can cause, these technologies remain painfully vulnerable to electromagnetic pulse weapons.