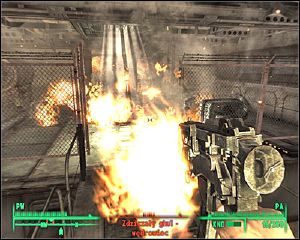 Explosive gases are commonly encountered in enclosed areas such as underground locations and buildings, such as Warrington Trainyard. It has also been encountered in few outside locations usually near ovens or gas lines.

The gas ignites when any ignition source is triggered within it. Projectiles or beams from energy weapons included in the original game, the firing of any bullet-based weapon when within the gas (flying bullets will not trigger the gas, but the impact of bullets from the Zhu-Rong v418 Chinese pistol create gas-igniting flame), any explosive or explosion and the presence of any open-flame weapon (Shishkebab, flamer, heavy incinerator) are all ignition sources. When ignited, the room will burst into flames.

Gas leaks are easily noticeable by noting the distortion or "waviness" of the air as you stand still and see through the gases. You additionally can find the point source, which is often a pipe that has been broken/cut.

Gas leaks can also be used as a weapon, since your enemies and all other characters will experience the same effects. They are often used as traps to weed out enemies. Gas leaks are used by Mr. Pinkerton and Reilly's Rangers for this use.