The crafting system has been extensively revamped from the one used previously in Fallout: New Vegas. Rather than taking pre-existing items and combining them, the player now relies on 31 resources to manufacture the items they want. Resources are acquired by taking junk items to a workbench and simply manufacturing the desired items. The game automatically breaks down junk and allows for storing unused junk in workshops for later use. While a list of in-game crafting recipes is available from the portal page, there is also a list of crafting recipes drawn directly from the game files.

All resources (and items) are shared between workbenches and crafting stations within a settlement,[1] and can be shared between settlements by establishing a supply line using the Local Leader perk.[2] Unassigned settlers will automatically scavenge for resources,[3] and scavenge more when their level of happiness is elevated.[4] 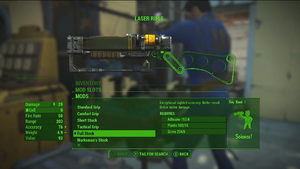 A laser rifle being modified

In the base game alone, there are over 50 weapons and over 700 individual modifications that can be made at the weapons workbench, including different receivers, sights, barrels, stocks, magazines, grips and muzzles. Melee and unarmed weapons may be modified with different materials as well as attachments that pierce armor or cause bleeding damage.

However, unlike in Fallout: New Vegas, there is no ammunition crafting at first. An ammunition plant from the Contraptions Workshop add-on is required to craft ammunition, but this is limited to conventional ammunition for firearms only. 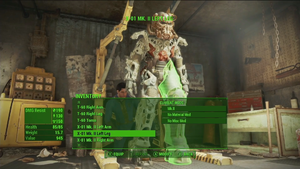 A base layer of clothing can be worn under various armor pieces for the chest, right and left arms, and right and left legs, in addition to headgear. These armor pieces can be modified at any armor workbench to improve overall damage resistance, as well energy and radiation resistances, the armor's weight and visibility, and other miscellaneous bonuses. Additionally, certain clothing items can be modified with the ballistic weave modification, increasing their damage resistance.

Furthermore, the helmets, chest pieces, arms and legs of power armor can be mixed and matched at a power armor station to customize the suits appearance, level of protection, weight, and statistic boosts. Additional upgrades can also be added for power armor that grant many other miscellaneous bonuses, such as enhanced unarmed damage, visual and targeting capabilities, sprinting and hauling capabilities, and even a jet pack.

Cooking stations allow the Sole Survivor to create "home-cooked" meals from the meat gathered from creatures, and plants from the wild or farms. This station also allows the production of vegetable starch, an adhesive.

Chemistry stations allow the Sole Survivor to create various chemical compounds, medicine, explosives, and syringer ammunition. It can also be used to create cutting fluid, a source of oil. In subsequent add-ons, traps, medicinal sludge, fireworks, and other variants of ammunition can be created. 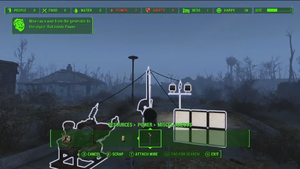 A generator, wire, and flood light 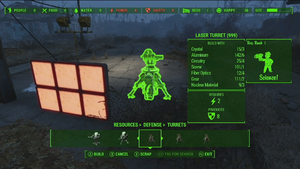 Not only can one disassemble wasteland junk to find spare parts, but entire structures of a settlement can also be demolished to gain building materials like concrete, rubber, steel and wood in order to create walls, floors, roofs, stairs, and even prefabricated shacks at the workshop to expand a settlement. Within a building, beds, furniture, and containers can be made, in addition to wall decorations (like mounted animals) and various floor coverings. In addition, as time goes on and the settlement becomes more hospitable, people will begin to inhabit the settlement and various trade caravans will come through as traders. With ranks in Local Leader, stores can be erected and supply lines can even be established to connect two or more settlements.

When developing a settlement, a "town bar" relays information about the town, measuring the number of people, how much food, water and power the town produces, how secure the town is, how many beds there are in town, and the general happiness of the settlement.

The settlement can be expanded by planting plots of crops and tapping into groundwater, as well as creating generators that can be used to power lights and other technologies. Terminals can be made to connect all of the objects on the power grid and control them all from one place. Some defensive technologies are powered by this power grid and are almost mandatory because a majority of settlements will be attacked by raiders, super mutants and Gunners at one time or another. These defenses include guard posts, conventional, laser, and missile turrets, as well as various traps.

Furthermore, every add-on added various elements to the settlement crafting system, such as new furniture or decorations; however, the Wasteland Workshop, Contraptions Workshop, and Vault-Tec Workshop add-ons were specifically geared to expanding workshop mode beyond these basic categories and added new categories of their own.

With the Automatron add-on, the robot workbench allows one to create a myriad of robotic companions using modular parts. The Robotics Expert perk also becomes more useful given that several robotic modifications require more extensive knowledge of automatrons than others.

With the Contraptions Workshop add-on various nonessential albeit amusing thingamajigs can be constructed, including ball tracks, armor and weapon racks, firework and firework launchers, and marquee signage.

However, as discussed previously in this article, various builders can also be constructed to manufacture a wide variety of helpful goods, including weapons, ammunition, explosives, armor, clothing, and food. Conveyor belts can also be made to carry these junk items and resources to these builders.

A background element of the Nuka-World add-on is the ability to mix the nine variants of Nuka-Cola to create special blends that provide unique statistic boosts via the Nuka-Mixer station.

According to Todd Howard, the settlement crafting mechanic was at least partially inspired by the development team playing a lot of Minecraft.[5]