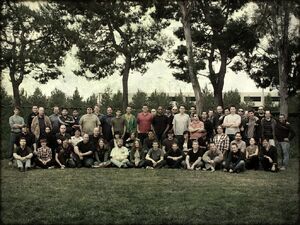 J.E. "Serpiente" Sawyer
"We've already established that I don't know what I'm talking about, so let's not dwell on it."

Brian "BRENZE" Menze
"Don’tchu know who I am?!"

Aaron Brown
Cochey Cantu
Roger "KOA" Chang
"You want me to do what?!"
Sean "The Butcher of Anaheim" Dunny
Paul "The Wildebeest" Fish
James "Subterranean Solzhenitsyn Aficionado" Garcia
Ed "Leapin' Lemurs" Lacabanne
"The jumping Cholla lunged at me. I swear I didn't touch it."
David "Lion-2P" Lieu
"It’s like you’re moving in slow motion!"
James "Simply James" Melilli
"Yeah, we make things only gods can make."
Megan "Megantron" Parks
"Ooh, is that horseradish?"
Kristen "The Atomic Hammer" Wong
"Well... it could be worse."

Jessica "Anita Sedative" Edge
"Don't you know I'm LOCA?"
Denise "Space Dinosaur" McMurry
"I’m only funny when I don’t want to be."
Megan "Meganbyte" Parks
Sydney "Detroit" Wolfram
"I haven't been home since Tuesday. My poor starving kitty..."
"I wasn't drunk, I always kept a solid grip on the floor."

Charles "Flipper" Staples
"Mexican coke is the best."
"Dr. Richards is a dude and likes other dudes. This perk brings out the tiger in him."

Jesse Farrell
Eric Fenstermaker
Akil "Long-legged Mac Daddy" Hooper
"Naturally, but I find that Thibault cancels out Capo Ferro."
"We should've named it Sodom. I bet these motherfuckers would know how to spell THAT."
Jeff Husges
Robert "General" Lee
"Ne incautus futuri."
Jorge "Oscuro" Salgado
Travis "El Gimpo" Stout
"...credit me as Travis "El Gimpo" Stout in the wacky credits so I don't look like a fuddy-duddy."
J.R. "Junior" Vosovic
"Did you figure out that back door?"
Stephanie Newland

Tess "I'm gay, not desperate" Treadwell
George Ziets
Jason "Monster of the East" Bergman
/taps watch "Just read the f%@#ing line."
Nick Breckon
Matt Grandstaff
Will "Badger" Noble
Andrew "Mojave, 'mo problems" Scharf
"We weren't sure what was going on so we had to check his package"
"HIS AI PACKAGE."

Michael "Friendlier Version of That Beard Guy" Bosley
"I'm not angry, I'm coding!"
"It compiles, it must work!"
Jonathan Burke
Justin "I'm not sleeping, I'm compiling" Reynard
"That's number 'fuck you' on my list of things to do"
Dan "Dan Rubalcaba" Rubalcaba
"My quantum milk machine brings every boy to all yards."
Rob "Pants are optional" Smith
"That's odd, it works on my machine"

Guy Carver, Tyson Christensen, Jean-Eric Khalife, Steve Weatherly, Meredith, Sophia, and Logan for giving up dad.
To the Naked Ninjas for helping me unwind. - AH
To my Family and Friends for being supportive. F. Peter, A. Milecki, San Diego John, Maj M. Beckhart, M. Callanan, Lt Col Johnston - AD
Kayelyn, Dad and My Mom - may she rest in peace. - BM
To Sarah Spofford for letting me bounce ideas off her Gnome. - CK
To my wife Kim, for being more amazing than I could have possibly imagined, & the Staples clan. - CS
Dave Marshall, Nick McWhorter, Tanja Koller - MCA
Leslie, Isabella and Colin Alpert - DA
Thanks to Alex Lee, Brian Robrigado, and Riona Lee, the few friends that I know (and have left!) that will play this game. - DL
My Mom, Diane, for always being there for me. Heather Wagenbach, Telka Curtis, Kevin Bellardi, & Johnathan Hayter for helping me unwind after work. - DM
For the love of Irma, always remembered. Thanks to Mom and Dad. - EL
Kaili, Sage, Chase and Raine for being the bestest group of girls and leaving the porch light on. - FK
To Ana, and Kai. - JS
Erica Wolfsen, Suki, Sesame, Tim Cain, Colin McComb, Dave Taylor - JES
To the love of my life, Lacey; my sweet Fallout baby, Isabelle; my little Italian Ma, Jamie; and my big brother Sam. I love you all! Jer 29:11 - JG
My dad, Milt, for everything, especially the C64 that started it all. Also Brian, Neko, Darwin, and Kali. - JF
Shan-Shan Fu, the Brimstone Fellowship, Elton D. Ammons III (in memoriam) - JS
Thanks to Angie, my lovely and only. I promise it won't be a Vegas wedding. MFP forevers! - JG
Thanks to my girls Erica, Abigail and Sophia. And to G. Eichler and I. Thomason for the wood pallet, our physics sounds wouldn't be the same without it. - JB
To Mike C. Altamirano, the Dennis Wong Family, Uncle Z-Francis Mao, Tim Donley, John Morgan, & Dennis Presnell - thanks for the support, and inspiration! - KW
Thanks to my beautiful wife Emilia for the patience and understanding, and the entire Liberty clan for the love and support - LL
Bryan Morse, Colin Koestler, Amanda Sauter, Nick and Kare, my family and Owyn - MP
Thanks to my beautiful wife, Stacey, for understanding my passion (and my long hours...) and Ken for helping to put me on this path of doom. - MB
My wife for putting up with me, my brother for getting me into RPGs, my mother for her creative wit, and my father for making me the stoic philosopher I am today. - RL
To Jeanne. Thank you for everything. - SD
Todd Van Elsacker, Mike Williams, Andy Clayton, Nick Marks, Toli Carter - southwest
My family - blood is not the only bond!, all my carnales, the OB crew & the ladies of LHH - TKT

Jason "loonyboi" Bergman
"You should be getting an achievement about now, but we ran out."

Ain't That a Kick in the Head

Home on the Wastes

It's a Sin to Tell a Lie

Love Me as Though There Were No Tomorrow

Mad About the Boy

Why Don't You Do Right?

Heartaches by the Numbers

Stars of the Midnight Range