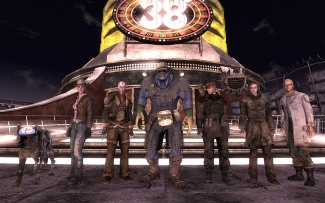 These followers accompany the player only in specific areas or for a limited duration of time. They are listed alphabetically:

The player was supposed to be able to gain a seventh humanoid follower:

The Dead Money DLC introduces three companions who play a crucial role in the story unfolding at the poisonous Sierra Madre.

The Honest Hearts DLC introduces three companions who will accompany the player during the storyline, one per act.

Note: In the latest version of Fallout: New Vegas Nerve appears to have been completely disabled. The following is a description of Nerve as it's supposed to work.

This special attribute reflects the player's influence on their followers. Tied to Charisma, Nerve boosts a companion's damage output and Damage Threshold by 5% per the player's character Charisma score. I.e. a Courier with 1 Charisma will give their companions a +5% bonus to each, while at 10 Charisma it will be a whooping +50% bonus. Nerve synergizes with Ferocious Loyalty and Spray 'n Pray, greatly increasing companion resilience.

Nerve depends in the current Charisma score and takes into account any active bonuses. As such, even with a starting Charisma of 1, it's possible to obtain the top Nerve bonus by boosting the player character's Charisma to 10 through a combination of bonuses: Empathy Synthesizer at the New Vegas Medical Clinic (permanent +1), Intense Training (permanent +1 per level), Party Time Mentats (temporary +5), alcohols (temporary +3 with a high Survival) and/or stacking them with moonshine.

Not all companions benefit equally from Nerve. Some gain bonuses that combine with Nerve to make them a lot more effective. These include: