Fallout: New Vegas promotional items lists all giveaway items created to promote Fallout: New Vegas. They have either been given away by Bethesda Softworks to journalists or are available with special editions of the game. 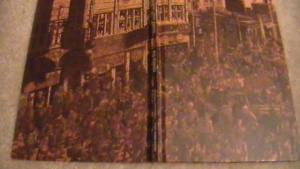 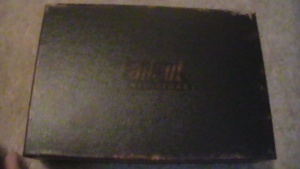 The case the holds all of the Collector's items plus the game. 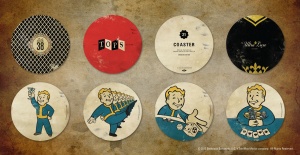 All four coasters, front and back

A specially designed set of drink coasters were produced for K-Mart pre-order sales. The four coasters represent the four large casinos: Ultra-Luxe, Vault 21, The Tops, and Lucky 38. The other side are printed with four individual Vault Boy images. The set came in a specially designed DVD Case with a printed insert. 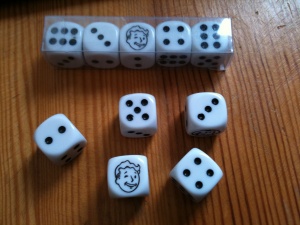 Set of five white plastic dice intended as pre-order bonus from a Scandinavian retailer. The side representing 1 on the die has Vault Boy's face. The remaining 5 faces are generic dots. 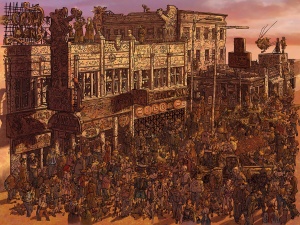 This is a very rare Promo item given to lucky attendees. This poster was distributed during the Pax convention and also during SDCC and Quakecon 2010. 24" X 17" in size, art by Geof Darrow, colors by Peter Doherty. The poster itself depicts the same image found on the All Roads comic that were included with the "Collector's Edition". 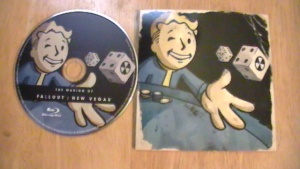 A DVD about how the game was made, containing never before seen video content, interviews and stuff. Comes with "Collector's Edition".

The content of the DVD is divided into eight chapters: "The Story", "The Characters", "The Art Direction", "Game Mechanics", "The Factions", "Sound Design", "The Technology" and "The Strip". Additional content includes teaser trailer and the E3 trailer. Subtitles are available in English, French, Spanish, German and Italian. 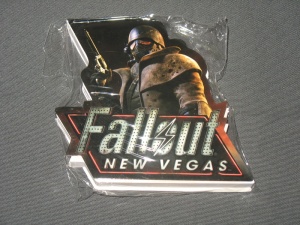 Notepad in plastic bag (back, sideview)

Set of "post-its" / memo notepad. Shaped as the New Vegas logo. Images of rear shows one pad printed with a PlayStation 3 logo. Versions for Xbox 360 do not exist.

The deck contains 55 Cards; 52 playing cards, 2 Jokers and one Caravan rule card. It is printed to resemble a standard Caravan deck with cards representing 8 of the game's casinos. These are Vault 21, Ultra-Luxe, Silver Rush, The Tops, Atomic Wrangler Casino, Lucky 38, Gomorrah and Bison Steve hotel. Images of all cards can be found in the gallery below.

A deck of 52 playing cards, measuring 2 11/16" wide by 3 11/16" tall. The box is printed with a vault-boy image as opposite to the Vault 21 Casino version that was included with the "Collector's Edition" of the game. 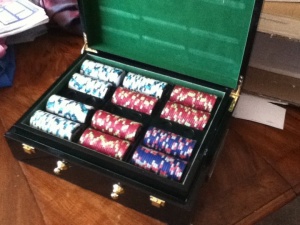 Open to Canadian residents this contest was available over Xbox Live while downloading the free Dead Money gamerpic. Only three cases were made, and were filled with poker chips of the Sierra Madre design. The total prize amount was valued to be at $500.00 CDN per case. The weight of this set is 50 lbs. 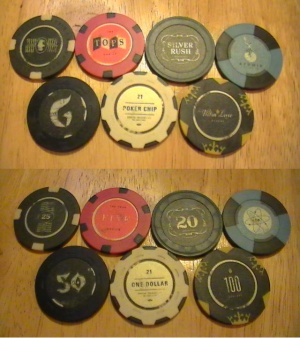 Each of these poker chips is designed to represent chips from major casinos found around the Mojave Wasteland. This comes with the "Collector's Edition" of the game.

A recreation of the game's "platinum chip". Comes with "Collector's Edition". 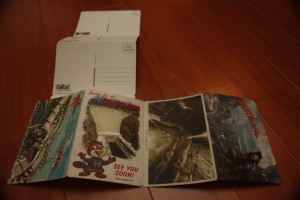 A set of promotional postcards featuring artwork from Bethesda video games, mainly Fallout: New Vegas. Also featured is Rage, Hunted: The Demon's Forge, and Brink. These were only handed out at special events like E3 and PAX, making them quite rare. Includes "Hoover Dam" postcard with beaver.

Fallout: New Vegas was sold by some retailers with four separate add-on packs:

Gamescom-exclusive t-shirt, with Vault Boy in a trench coat, with a revolver in his hand, standing in front of the New Vegas skyline, with "Gamescom 2010" written below.