Traits modify aspects of gameplay, granting a benefit in one area at the cost of hampering another. With the exception of Wild Wasteland, which has a less direct effect on gameplay, each trait modifies (and hampers) the player's statistics in some way; this can include primary statistics, derived statistics, SPECIAL points and skills. During character creation the player may choose a maximum of two (with a minimum of none at all). The add-on Old World Blues adds six additional traits and makes it possible for you to re-pick your assigned traits, but only once.

These traits are only available with the Old World Blues add-on. They can be chosen during character creation or switched with the Sink Auto-Doc. 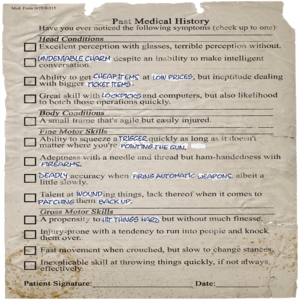