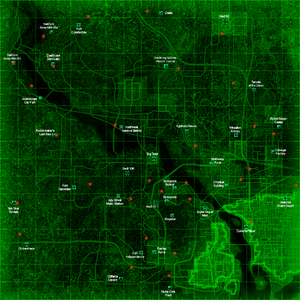 Once the Enclave have made their first appearance in The Waters of Life quest, checkpoints, camps and outposts will be established at various locations throughout the Capital Wasteland. These outposts are usually manned by an Enclave officer, accompanied by several Enclave soldiers and other forces ranging from sentry bots to defense turrets and mind controlled deathclaws.

Approximately 30 outposts are found scattered throughout the Capital Wasteland, and they are commonly found on the remnants of the pre-War roading system giving them the appearance of a checkpoint patrol network.

A smaller sub-section of the sites are used by the Enclave for conducting research or for testing technology. Such sites can be identified by locating an Enclave Field Research terminals, which can be accessed to determine the nature of the research being carried out.

Many of the sites are used for exterminating wastelanders, with an Enclave soldier using a flamer or heavy incinerator to carry out the task.

An outpost near Old Olney is the site where the player can carry out the optional component of the Shock Value quest; to take control of an Enclave-controlled deathclaw.

Overlooking the Bannister crater, east of Fort Bannister and south of the VAPL-58 Power Station, Crater Camp in Sector 762 is tasked with retrieving samples from the crater.

Southwest of the Robot Repair Center and Canterbury Commons.

East-northeast of Springvale School, on the coast at the bombed out power plant.

West-northwest of Temple of the Union on a rock-lined hilltop northeast of Minefield, due east of The Roach King.

Northwest of Super-Duper Mart, half way to Springvale School, at the house with the silo.

Detailed below is a map and an alphabetized list containing all the Fallout 3 locations (calculated by the nearest world map marker) where the Enclave have set up, with reference made to the size and type of Enclave force likely to be encountered.

Locations noted with a [1] indicate that a portion of the Enclave outpost force (typically a single Enclave soldier) may be encountered at any time prior to The Waters of Life.

Southeast of Agatha's House, south-southwest of Scrapyard, by a white trailer.

On the western ledge of the Capitol Building the Enclave set up a small outpost.

Nestled between two buildings east of the Chryslus building, with a communications tower visible on the roof of the adjacent building.

Half way between the Corvega Factory and the Chryslus building, under an overpass.

Up on a hill to the right of the entrance to Deathclaw Sanctuary.

Immediately northeast of Dukov's Place, just out the door.

A bit east of the Fairfax Ruins, under a water tower.

On the hills to the northeast of Fort Constantine, by the water tower there.

On the curving road due north-northeast of Fort Independence. The camp holds two basic fortifications, a cage, communications array, supplies, and a portable fusion generator.

On the major highway south-southwest of Fort Independence, between it and the Cliffside Caverns.

Visible to the northwest from the fast travel arrival point in front of Ronald Laren's house at Girdershade.

Directly east along the road from Jury Street Metro Station.

Northeast of the National Guard Depot along the eastern border. The camp includes a cage that doubles as an infirmary/examination lab and an old house being used as a burn site to dispose of the bodies of wastelanders that did not pass the genetic compliance check.

At the end of the collapsed highway opposite Arefu near Northwest Seneca Station.

Just a bit to the north of the Nuka-Cola Plant. Three Enclave trainees are stationed here under an officer.

In the ravine below the wooden bridge on your way out of Oasis.

On the hill southeast of Old Olney.

Southwest of the Robot repair center and Canterbury Commons. Quite close, should be visible from a distance.

Outside and inside SatCom Array NW-07c.

North-northwest of Springvale and northeast of the Vault 101 entrance.

A small camp set up by a field research team to study the mutated creatures in the area.[2] Between Springvale School and Vault 106, south of Big Town.

Northwest of Super-Duper Mart, half way to Springvale School, at the house with the silo.

Temple of the Union

West-northwest of Temple of the Union - On a rock-lined hilltop (past the highway), northeast of Minefield, due east of The Roach King.

South-southwest of Vault 92 towards the Greener Pastures Disposal Site, referenced in the optional Shock Value objective.

East-northeast of Wheaton Armory and due west of Robot Repair Center, at a crossroad.

From the northern gate of Wheaton Armory, two soldiers enter the base to attack raiders. They do not maintain an established outpost.

Scripted Events are Enclave appearances that involve some kind of dynamic event. These events usually involve a Vertibird.